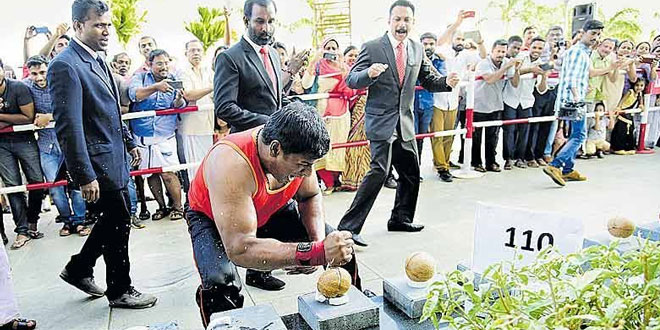 Most coconuts smashed in one minute

Kerala, India – March 1, 2017 – Abeesh Dominic, 25, a native of Poonjar in Kottayam district, smashed 124 coconuts with bare hands in less than a minute, thus setting the new world record for the Most coconuts smashed with one hand in one minute.

Photo: Abeesh P. Dominic, a native of Poonjar in Kottayam district, broke 124 coconuts with bare hands in a minute.

The Guinness World Records world record for the most coconuts smashed with one hand in one minute is 118, and was achieved by Muhamed Kahrimanovic (Germany), on the set of the live TV program Das Sommerfest der Volksmusik in Halle/ Saale, Germany, on 4 June 2011.

Guinness World Records also recognized the world record for the most coconuts smashed around a person while blindfolded in one minute; it is 35 and was achieved by Karamjit Singh and Kawaljit Singh (both India) on the set of ‘Lo Show dei Record’ in Milan, Italy, on 25 July 2014.

According to Onmanorama, even though the time limit is sixty seconds, 25-year-old Abeesh managed to smash 145 coconuts in 53 seconds but only 124 were officially counted because the others were not fully crushed.

Abeesh, who works as a mechanic at the Eerattupetta KSRTC depot on contract basis, said he had successfully done other risky stunts like breaking hockey sticks and helmets with his bare hands, pulling a 10-ton bus to a distance of 50 meters with his teeth and stopping a fan running at a speed of 2000 rpm with his tongue.