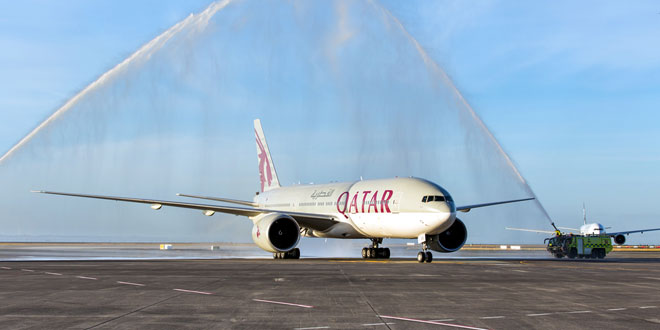 Doha, Qatar – February 7, 2017 – A Boeing 777 departed from Doha, Qatar and landed in Auckland, New Zealand after flying 9,031 miles (14,535 kilometers); the scheduled time for the return flight is 17 hours and 30 minutes, thus setting the new world record for the longest commercial flight.

The Guinness World Records world record for the Farthest flight by a commercial aircraft was set by a Boeing 777-200LR Worldliner which flew 11,664 nautical miles (21,601.7 km or 13,422.7 miles) non-stop and without refuelling from Hong Kong to London, UK from 9 to 10 November 2005 in 22 hr 42 min, the longest flight ever by an unmodified commercial aircraft.

Guinness World Records also recognized the world record for the longest non-stop flight by any aircraft; it was achieved by Steve Fossett (USA) who flew 42,469.4 km (26,389.3 miles) in the Virgin Atlantic GlobalFlyer airplane. Fossett took-off from the Kennedy Space Centre, Florida, USA on 8 February 2006 and landed 76 hours, 45 mins later in Bournemouth, Dorset, UK on 11 February 2006.

The return flight touched down in Doha. The scheduled time for that leg is 17 hours and 30 minutes.

Qatar Airways CEO Akbar Al Baker, who traveled on board the inaugural flight, said the new Auckland service was “an important milestone” in the airline’s global expansion.

The previous world record was held by Gulf rival Emirates. Its Dubai to Auckland service is now the world’s second longest at 8,823 miles.

One airline does fly a longer route — Air India’s 9,408-mile outbound flight from Delhi to San Francisco — but it flies a much shorter distance on the return leg.

Qatar’s route is the shortest possible distance between Doha and Auckland.