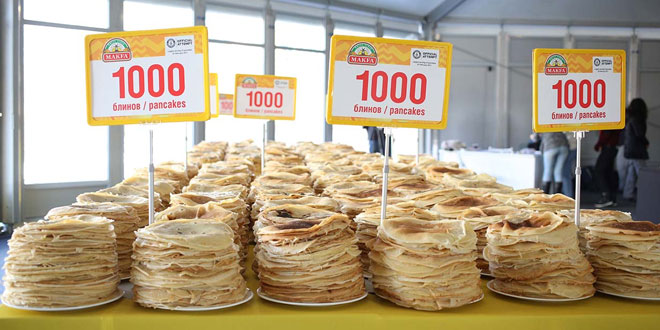 Moscow, Russia -March 12, 2017- Russian flour exporter JSC MAKFA broke a Guinness world record by preparing 12,716 pancakes to celebrate the week before Lent; a total of 16 professional chefs gathered to cook the pancakes in a tent outside a public art gallery in Moscow, setting the new world record for Largest serving of pancakes.

The Guinness World Records world record for the most people tossing pancakes is 890 and was achieved at an event organised by the University of Sheffield (UK), in Sheffield, UK, on 15 February, 2012.

Guinness World Records also recognized the world record for the most pancakes made in eight hours; it is 76,382 achieved by Batter BlasterTM LLC (USA) at Centennial Olympic Park, Atlanta, USA, on 9 May 2009. A total of 175 volunteers cooked the pancakes and served approximately 20,000 people.

Russian flour exporter JSC MAKFA honored 3, which celebrates the beginning of Spring, by preparing 12,716 pancakes to claim the World Record for “Largest serving of pancakes.”

The chefs cooked for nearly eight hours to produce the record-breaking heap of pancakes, which were then dished up for the public.

MAKFA Director Natalia Yurevich expressed her gratitude to the chefs and everyone else involved.