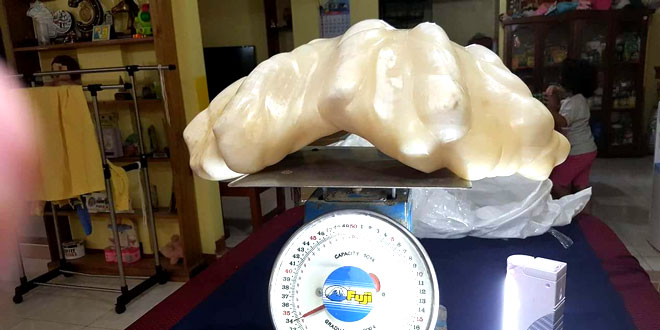 For 10 years, the 34-kilogram (75-pound) pearl was hidden in a bag under a bed. The fisherman’s family would rub it with their hands before going out to sea in the belief it would bring them luck, said relative Aileen Amurao.

The fisherman, his father and brothers found the irregular-shaped pearl inside a giant clam that stuck to their boat’s anchor when they sought refuge from a squall on a reef, Amurao said.

The pearl was sitting on a bench in her home for weeks until she found time to check the internet, and she was shocked to learn that it could be the world’s biggest at 67 centimetres (2.2 feet) long and 30 centimetres (1 foot) wide. It has been estimated to be worth more than $100 million US ($130 million).

The fisherman and his family decided to turn over the pearl to the city mayor, who had it displayed in a glass case in Puerto Princesa’s city hall to attract tourists. The fisherman will receive a still-unspecified reward from the local government.

The current largest known pearl in the world was found in Palawan sea in the 1930s.

The Pearl of Lao Tzu, previously known as the Pearl of Allah, weighed 6.4 kilograms.