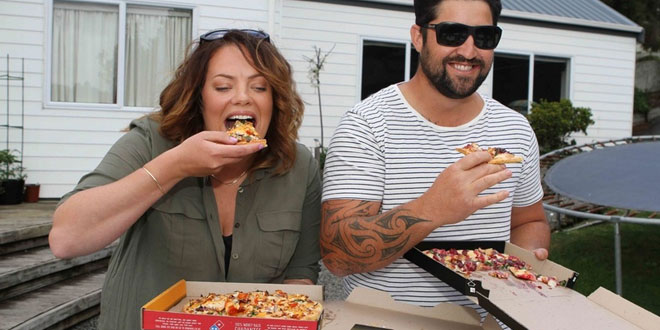 Guinness World Records also recognized the world record for the longest line of pizzas; it measured 541.8 m (1,777 ft 10 in) and was achieved by the Van Duzer Foundation and the St. Lucie County Education Foundation (both USA) in Fort Pierce, Florida, USA, on 16 May 2009.

The delivery service is a partnership between Domino’s New Zealand and drone delivery company Flirtey.

Don Meij, the chief executive of Domino’s Pizza Enterprises, said that the lead-up to this delivery involved a number of trials, including adjusting food temperatures, as well as some co-ordination with the government, according to the New Zealand Herald.

GPS navigation was used to autonomously control the drone, which was also overseen by experts and a drone pilots.
This order took around two to three minutes to arrive, according to the report, which would be half the usual time taken by motorcycle delivery on the same route.

Domino’s boss Don Meij said that drones constitute the “future” of pizza delivery. “They can avoid traffic congestion and traffic lights, and safely reduce the delivery time and distance by traveling directly to customers’ homes,” said Meij, according to AFP.

“The delivery was a lot quicker and it was most certainly more fresh and hot. We are really excited to see how this proceeds,” the couple told stuff.co.nz.