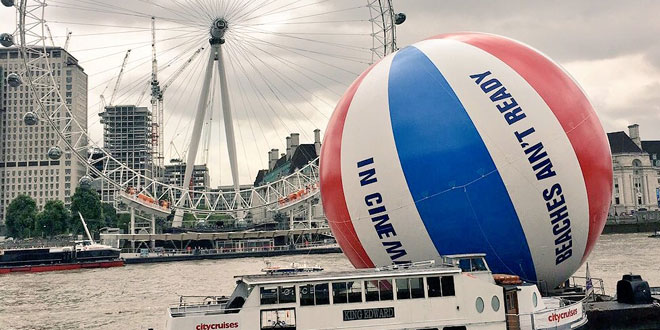 Photo: To celebrate the release of BAYWATCH in cinemas, a 20-meter large and 1 ton heavy BAYWATCH beach ball was floated on the river Thames in London.

The Guinness World Records world record for the largest disco ball measures 10.33 m (33 ft 10 in) in diameter and was achieved by Bestival (UK) for the Desert Island Disco at Robin Hill Country Park, Isle of Wight, UK, on 7 September 2014.

Paramount Pictures created the world’s largest beach ball for the London premiere of Baywatch. World’S Largest Beach Ball At London Baywatch Premiere The huge red, white, and blue beach ball sits on the River Thames in Westminster in London to celebrate the film’s premiere in the UK.

The official Twitter account for Paramount Pictures UK shared photos of the massive red, white and blue ball, which was placed on the River Thames to set the World Record for “largest inflatable beach ball.”

In addition to exceeding the previous record diameter of 51 feet and 10 inches, it was required that Paramount Pictures’ ball consisted of the same materials used to make a standard size beach ball.