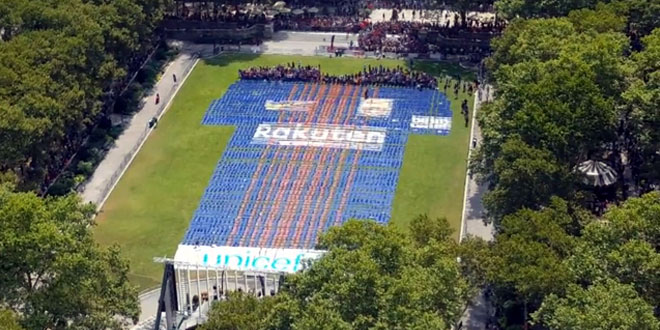 Photo: Barcelona’s president, Josep Maria Bartomeu, participated in an event at Bryant Park in New York, between Fifth Avenue and 42nd Street, where a giant Blaugrana shirt was made with the help of supporters.

The Guinness World Records world record for the largest human image of a torch consisted of 3,032 participants, achieved by National integrated forum of artists and activists (India) in Karnal, India, on 23 March 2014.

Guinness World Records also recognized the world record for the largest human star; it consists of 6,398 participants and was achieved by the people of Orel with the support of Orel Government (Russia), in Orel, Russia on 7 May 2015.

Over 4,000 fans took part in the event, ahead of the Catalan club’s first game on their U.S. tour on Saturday night at MetLife Stadium in nearby New Jersey.

Participants lined up together on a lawn, holding sheets of paper over their heads, each printed with a tiny part of the jersey.

It was the “largest human soccer jersey” ever made — breaking the previous Guinness world record held by Sutton United’s Wayne Shaw.

Further events are then planned for Washington, where Barca play Manchester United on July 26, and Miami, where they will face Clasico rivals Real Madrid on July 29 before heading back to Spain.