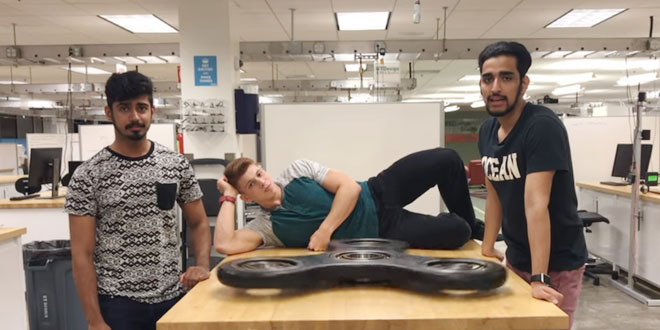 Photo: Four students gained publicity all over the Metroplex by building a 150 pound fidget spinner which sets the new records for the largest forbearing fidget spinner, the longest spinning and for the heaviest. From left: Suhail Rahmetulla, Ian Bouton, Pratik Bhosale.

The Guinness World Records world record for the longest duration to spin a fidget spinner on the nose is 1 min 46 sec, and was achieved by Halden Rhorer (USA) at the BuzzFeed office in New York, New York, USA, on 24 May 2017.

Guinness World Records also recognized the world record for the most fidget spinner behind the back passes in 30 seconds; it is 22, achieved by Juan “Juanito” Esteban Cardona (Colombia) in Los Angeles, California, USA, on 29 June 2017.

Pratik Bhosale, a mechanical engineering senior, received three large rolling bearings for free while he was interning for an industrial manufacturing company.

Overall, the cost of making the fidget spinner was $150, out of pocket. Most of the supplies were bought at Home Depot, but they were able to utilize other supplies and tools at the student-run UTDesign Makerspace facility located at Synergy Park North, where students can use arts, crafts, electronics and 3D printing to build and create.

As far as building the fidget spinner, the composing process involved making a design on a software program, three layers of plywood, a large jigsaw to cut out the shape and then sanding until the bearings fit into the holes.