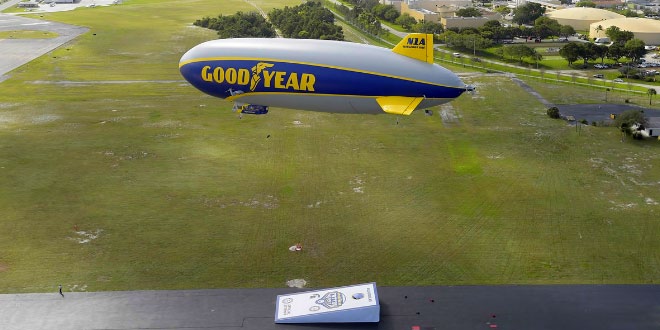 Photo: The Goodyear Tire & Rubber Company set the world record for constructing the World’s Largest Game of Cornhole to kickoff a week of celebration leading up to the 80th Annual Goodyear Cotton Bowl Classic on December 31 in Arlington, Texas.

The Guinness World Records world record for the longest successful cornhole shot is 33.528 m (110 ft) and was achieved by Austin Bower (USA) in Cottonwood, Arizona, USA, on 7 March 2015.

Guinness World Records also recognized the world record for the longest marathon playing cornhole; it is 26 hr 12 min 44 sec by Team Fry and Team Gable (both USA) during FRY fest in Coralville, Iowa, USA, from 28 to 29 August 2014.

As their school mascots cheered from the ground, cheerleaders from Michigan State University and the University of Alabama flew more than 200 feet above the massive cornhole game board to toss beanbags out of Goodyear’s newest blimp, Wingfoot One.

The students competed for bragging rights in the larger-than-life game of cornhole as their teams prepare to face off in the College Football Playoff Semifinal at the Goodyear Cotton Bowl Classic on New Year’s Eve. The epic game ended in a 1-1 tie.

The giant game board was constructed at the Goodyear Blimp base in Pompano Beach, Florida and is 16 times larger than a standard cornhole board, which measures a mere four feet by two feet. In all, it would take 8,192 regulation-sized cornhole beanbags to cover the entire surface of this new world record-holding structure.