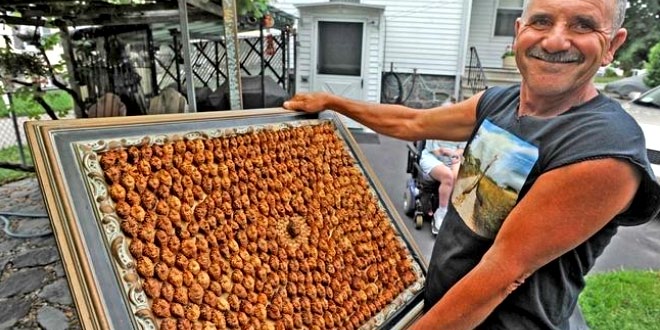 Taunton, Rhode Island, USA – January 21, 2016 – Since 1976, Joe Resendes has been collecting peach pits; he has collected more than 3,000 peach pits, thus setting the new world record for the Largest collection of peach pits

Photo: Joe Resendes with some of his 3,000 carved peach pits. Photo: Mike Gay

The Guinness World Records world record for the largest collection of beer bottles belongs to Ron Werner (USA) and consists of 25,866 individual beer bottles as of 27 January 2012 in Carnation, Washington, USA. Ron Werner started his collection at the age of 14.

Guinness World Records also recognized the world record for the largest collection of jade; it consists 7,176 unique items and belongs to Lam Chung Foon (Hong Kong). The collection was verified in Hong Kong, China on 20 June 2015.

Resendes, 61, said he has been carving peach pits into the face sculptures since he was in his early 20s, when he worked at a chemical factory and had a lot spare time to whittle, The Taunton Daily Gazette reports.

Before coming to the U.S. from the Azores at age 13, all the children where he grew up would learn to carve peach pits into miniature baskets, he said.

His 3,000 peach pit face carvings, along with 1,800 in reserve waiting to be carved, are part of an overall collection of sculptures that Resendes refers to as “Sedneser Seeds,” which is a name that stuck because of its consonance and it’s hidden meaning. “Sedneser” is Resendes spelled backwards.