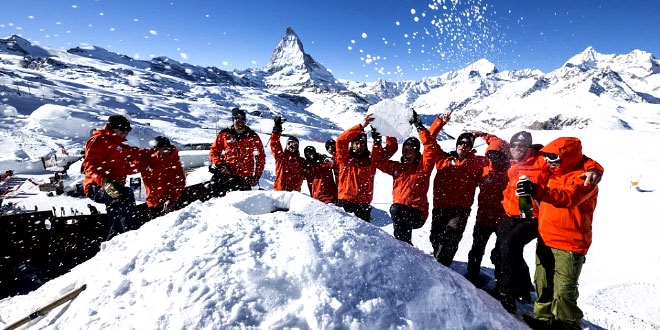 Iglu-Dorf, Switzerland – January 22, 2016 – Swiss locals build the world’s biggest IGLOO in the Swiss Alps resort of Iglu-Dorf in front of Matterhorn, situated in Zermatt at an altitude of 2,727m; a total of 1,700 snow bricks were needed tu build the 13m-wide igloo, which has taken 11 days to build for the resort’s 20th anniversary.

Photo: The last snow brick has been laid on the world’s biggest igloo in Switzerland, which boasts a ceiling 11 metres high. Champagne was popped open as the last brick was laid on the 13m-wide igloo, which has taken 11 days to build for the resort’s 20th anniversary. A total of 1,700 snow bricks were needed during the construction phase. Two teams of five, led by the resort’s founder Adrian Gunter and managing director Reto Gilli, completed the mammoth task. Photo: EPA

Guinness World Records also recognized the world record for the largest snow igloo; it has an internal diameter of 12.1 m (39 ft 8 in) , an internal height of 8.1 m and was built by the TV team of Pro 7 Galileo (Germany) led by TV reporter Funda Vanroy (Germany), in Kühtai, Tyrol, Austria, as verified on 7 February 2011.

The current Guinness World Records world record holder of the largest igloo was built in February 2011 in Grand Falls, Canada, with a diameter of 9.2m and a ceiling height of 5.3m.

Volvo will showcase the new XC 90 in what will be the highest showroom in the world, after it was named the official partner for build.