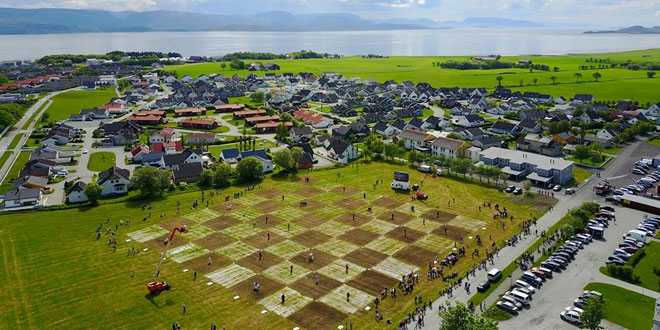 Brekstad, Norway – July 9, 2017 – A world record for the largest chess board was set in the town of Brekstad in Norway’s Sør-Trøndelag region; the world’s largest chess board, measuring at 6,400 square metres, hosted a match between Norwegian grandmaster Simen Agdestein and Germand rival grandmaster Niklas Hushenbeth

Guinness World Records also recognized the world record for the longest chess marathon is 44 hr 21 min and was achieved by Joan Oliver Marquet and Antonio Nadal Tur (both Spain) in Palma, Spain, from 16 to 18 January 2016.

Chess rivals Agdestein and Huschenbeth stood on cranes at the side of the board to move their pieces, who were all played by local people.

The squares are green and brown – grass and milled soil – rather than the traditional black and white, and each square measures 10 x 10 meters, so that each side of the board is a total of 80 meters long.

“We were very luck with the weather. It started to rain just as the black king was put in checkmate,” Grøntvedt told Adresseavisen.

After an hour and a half’s play on the giant board, the checkmate went to Agdestein. “Sure, it was a bit unusual using an enormous board and a bit special, but it was a fantastic event,” the grandmaster told NRK.

“We were lifted very high up, so we had a good view. But to be honest, I mostly had the positions of the pieces in my head,” Agdestein added. “The board was fantastic, and the view was wonderful, we could see across the fjord and it was cool with all the living pieces,” he said.