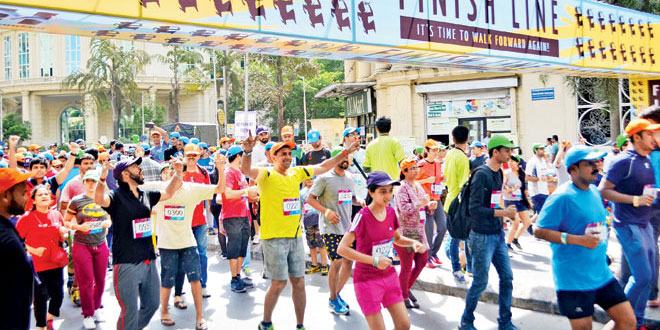 Photo: A whopping 1,007 Mumbaikars turned their backs to the finish line in the ‘What !f Backward Run’ that broke the Guinness World Record for reverse running at Hiranandani Gardens.

The Guinness World Records world record for the largest kilt race consisted of 1,764 participants and was achieved by the Perth Running Goats Club (Canada) at the Perth Kilt Run in Perth, Ontario, Canada, on 23 June 2012.

Enthusiasts of all age groups pitched in to break the record set by Germany, where 571 participants had run 133 metres in 2016.

“The idea was to have a minimum of 600 people participating, so we were really surprised to see more than a 1,000 people turn up. It was heart-warming to see the spirit of the Mumbaikars,” Harish Mohan, an organiser at the event, told Midday.

Why running backward is beneficial

Helps improve muscular balance: Retro running strengthens the opposing muscle groups that you normally work when running forward. For instance, running ahead puts a lot of pressure on the hamstrings and knees, whereas running backward strengthens the calves, quads and shins.

Burns more calories: Some experts suggest that taking 100 steps backward is the same as taking 1,000 steps forward because going reverse burns one-fifth more calories than the opposite. If you’re looking to lose weight but don’t have too much time for your exercise routine, you can burn more calories in a shorter period of time with retro running!

Good for your posture: While running, many people tend to slouch and lean too far forward. Backward running will naturally keep your back straight as you move.

Heightens your sense: While running, you can’t see where you are headed, so your sense of hearing and peripheral vision will become more acute, as you use them to navigate and move.