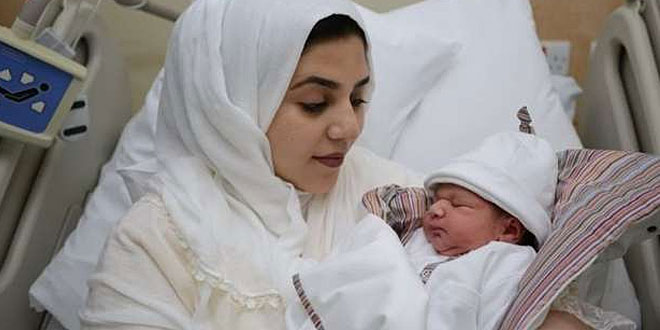 London, United Kingdom – December 16, 2016 – Moaza Al Matrooshi, 24, originally from Dubai, is the first person in the world to be delivered of a baby after having the ovary removed and cryopreserved before she entered puberty.

Photo: Moaza al-Matrooshi of Dubai became the first woman in the world to have a baby using an ovary that was preserved before puberty.

The Guinness World Records world record for the First test tube baby was set by Louise Brown (UK) baby ; it was delivered by Caesarean section from Lesley Brown (UK), in Oldham General Hospital, Lancashire, UK at 11.47pm on 25 July 1978 weighing 2.6 kg  (5 lb 12 oz). She was externally conceived on 10 November 1977.

Guinness World Records also recognized the world record for the Youngest ever open heart surgery was set by Baby Chanel who survived operation at just one minute old.

Ms Al Matrooshi, originally from Dubai, was eight when she had the organ retrieved before having chemotherapy and a bone marrow transplant for the inherited blood disorder Beta Thalassaemia.

As she had not entered puberty, she could not have IVF treatment to allow her ovaries to produce eggs. Her remaining ovary was only partially functioning following the chemotherapy and she went into early menopause.

Doctors decided to transplant the frozen ovarian tissue back into Ms Al Matrooshi when she was 21 to give her a chance of conceiving using her own eggs. Ms Al Matrooshi then underwent IVF treatment at CARE Fertility with her partner Ahmed and, aged 24, gave birth to a baby boy at the Portland Hospital.

“Moaza has become the first woman in the world to give birth following the transplant of her own ovarian tissue removed before puberty.”