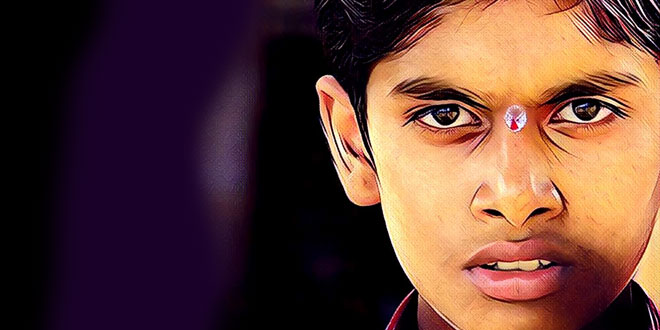 Rishab pushed open the door of his house and ran in. His bag flew from his back on to a nail on the wall.

“First time!” he shouted gleefully. He had been practicing for months, and now the bag had flown to its right place almost on its own, as if it had a pair of wings.

“Is that you, Rishab?” called his grandmother, coming in from the kitchen. Rishab grinned to himself. His grandmother asked this question every single day. The running footsteps and the bag’s slap against the wall told her who it was, but still their afternoons together always began with this question.

Later, after they had eaten and she washed the dishes, they lay down side by side.

Sometimes, when Rishab thought about which part of the day he liked best, he found it difficult to make up his mind. He loved the early morning when he woke up to the sound of his grandmother singing under her breath, as she picked flowers in the muddy little patch behind the house. Or the evening, when his mother got home from work, then his father.

But the afternoons were, he decided, the most peaceful. His grandmother and he would lie side by side, the sun streaming in through the window into the quite room. Or she would tell him stories, stories different from the kind he read, or heard in school.

Some days, she would sing him one of the hundreds and hundreds of songs she knew. She had a soft, trembling voice, but she knew what every word meant. Rishab could tell, from the way she sang, that she believed in the song. He could see how much she loved it.

Sometimes she would sing a story-song; a story from the Ramayana or the Mahabharata.

She told Rishab once, “Rama is called karuna-samudra. Do you know what that means?”

“Karuna is like pity,” she said. “The gentle, sorry feeling you have when you see something that needs your kindness. Samudra of course is a deep deep ocean. So you see, there is no end to Rama’s kindness, or his tenderness for all living things.”

Then one day, Rishab came home later than usual. His grandmother stood at the door, waiting for him.