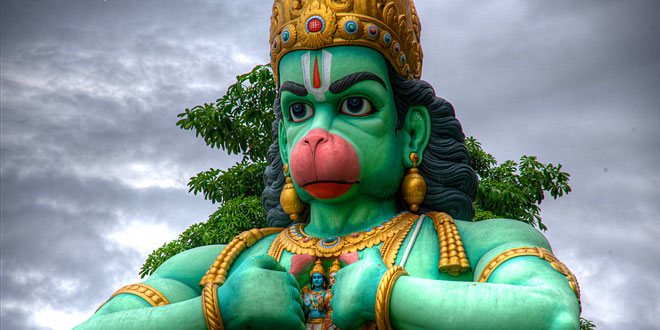 Lord Hanuman Quiz For Students And Children: Worshiped by many who wish to gain courage and strength in their lives, Lord Hanuman is probably one of the most celebrated and revered figures in the Hindu Mythology. And although most of us know quite a bit about the deity’s life (thanks to all the TV shows), there are still many things that we don’t really know about our beloved Bajrangbali. Solve this quiz to learn how much you know about him…

Hanuman – Hindu Monkey God And Hero Of The Ramayana

Hanuman, the Hindu monkey god, is one of the most celebrated and worshiped figures in Indian religion, but mention him outside of India and you are likely to be met with a blank stare.  So who is Hanuman and what does he represent to the Hindu faith?

As is the case for many of India’s gods, several stories are told explaining Hanuman’s origin. In one interpretation Shiva and Parvati decide to transform themselves into monkeys and indulge in amorous games in the forest.  As a result Parvati becomes pregnant. Shiva, conscious of his godly responsibilities and desiring to conform to the laws of nature, directs the wind god Vayu to carry the offspring from Parvati‘s womb to that of Anjana – an Apsara with the form of a monkey who has prayed to be granted a boy child. In another version of the story Hanuman is simply the offspring of Anjana and Vayu.  In yet another version of the story, he is the son of the King and Queen of the Monkeys.

Many stories are also told of Hanuman’s childhood. As the son of Lord Shiva and a monkey, Hanuman is variously described as spirited, restless, energetic and inquisitive.  One point all the major texts agree on is his mischievous nature.  As a youth Hanuman often abused his powers to pester the saints and holy men living in a nearby forest, with tricks such as beard pulling and the dousing of sacred fires.  However, it is as an adult that the monkey god Hanuman comes into his own.