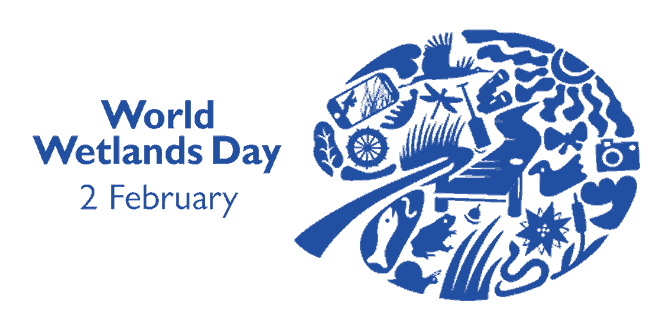 World wetland day is celebrated every year all across the world to commemorate the Convention on Wetlands means the Ramsar Convention which was held on 2nd of February in 1971 in the city of Ramsar, Iran at the Caspian Sea coasts. It was started celebrating for the first time in the year 1997.

This year’s theme shines a spotlight on wetlands as a source of freshwater and encourages actions to restore them and stop their loss.

We are facing a growing freshwater crisis that threatens people and our planet. We use more freshwater than nature can replenish, and we are destroying the ecosystem that water and all life depend on most – Wetlands.

The 2021 campaign highlights the contribution of wetlands to the quantity and quality of freshwater on our planet. Water and wetlands are connected in an inseparable co-existence that is vital to life, our wellbeing and the health of our planet.

2 February each year is World Wetlands Day to raise global awareness about the vital role of wetlands for people and our planet. This day also marks the date of the adoption of the Convention on Wetlands on 2 February 1971, in the Iranian city of Ramsar on the shores of the Caspian Sea.

Wetlands are land areas that are saturated or flooded with water either permanently or seasonally. Inland wetlands include marshes, ponds, lakes, fens, rivers, floodplains, and swamps. Coastal wetlands include saltwater marshes, estuaries, mangroves, lagoons and even coral reefs. Fishponds, rice paddies, and saltpans are human-made wetlands.

How you can get involved

Join us as: an event organizer, educator or participant

‘Ameenpur Utsav’ was celebrated at Ameenpur Lake, Hyderabad on the occasion of World Wetlands Day. In 2016, the government of Telangana declared the lake as Biodiversity Heritage Site which is the only biodiversity site in the country. The celebration started at 09:30 AM on 02nd Feb. and included various competitions like drawing & painting, singing, speech, and dramas.

Manipur also observed the World Wetlands Day at Sendra, Bishanpur District. A painting competition was organised where more than 100 students from various schools participated in the event. The winners of the competition were given rewards of Rs. 3000, 2000 and 1000 for the first, second and third position respectively along with the participation certificates.

Children from the city of Tshwane, South Africa celebrated the day at Colbyn Wetland Nature Reserve. There were around 200 children who visited the reserve and learned more about the importance of wetlands and how it protects us from global warming and climate change.

It is celebrated by gathering together with common people, government agencies, NGOs, non-government organizations and people of all the community to enhance the public awareness towards the significance of wetland. To celebrate this event, variety of programs like seminars, lectures, nature walks, sampan race, poster exhibitions, video films screening, slide shows based on the wetland, art and quiz competitions, painting competition, photography exhibition, community cleanup, interviews on radio and television and etc takes place at the national level at many places. Various other new wetland policies and new Ramsar sites gets launch at this day.

The Ramsar Convention offers an international structure in order to globally support the conservation and sustainable management of the wetlands. It is celebrated to make aware the public, discus the value of wetlands, its beneficial aspects as well as to promote its conservation and use for enhancing the overall level of the human health, growth and development. The event celebration plays a great role in making the healthy wetlands in order to deliver the worth ecosystem service to benefit the common people. The demands of water required for growing crops, energy supply and various needs of the industry are also focused during the celebration. It is celebrated to promote the proper use of wetlands and their resources.

World Wetlands Day is celebrated every year in Ahmedabad, India by organizing several activities involving both children and adults.

It is also celebrated at the WWF-India Secretariat, New Delhi to promote the common people understandings about the importance of link between wetlands and water as “without water there will be no wetlands – and without wetlands there will be no water!”.

It is also celebrated in the Jammu and Kashmir, at Mansar Wetland (a Ramsar site) with the involvement of the Department of Wildlife Protection and Department of Environment and Remote Sensing. The event is celebrated by organizing a symposium (related to event) in the presence of Honorable Minister of State for Forests, Environment and Ecology. The event is celebrated by the participation of school students, conservationists, members of panchayat, academicians, scientists and common masses.

The themes of the World Wetlands Day celebrations are listed below: