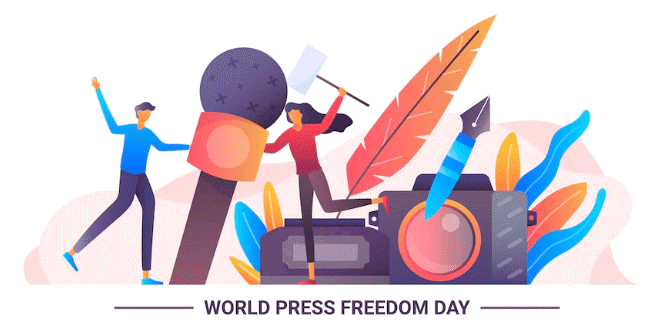 Media plays a vital role in reasserting the values on which the democracy of respecting rights has been built. Therefore, our government must help in keeping the journalists safe.

World Press Freedom Day, 2022 was celebrated worldwide on 3rd of May, Tuesday.

The main event of the 26th World Press Freedom Day was celebrated at Addis Ababa, Ethiopia. The event was supported by UNESCO and the Government of Ethiopia and it mainly focused on the challenges faced by the media during the elections and the role of media in supporting peace and prosperity.

In India, the Department of Journalism and Mass Communication of Bhawanipur Education Society, Kolkata organised debates, essay writing competition, quizzes and many more events on the occasion. The event also held seminars and talks on the importance of free and fair media in a democratic country.

In Nepal, a rally was organised ahead of World Press Freedom Day which highlighted the importance of press freedom and right of expression. Journalists across the nation along with the members of the civil society took part in the rally and discussed on the issue of press freedom and condemned the misuse of the various media platforms for personal gains.

World Press Freedom Day serves as a reminder of the significance of free press in a safe and functioning society and acts to honor the journalists who have lost their lives while supporting free press. Freedom of expression is a basic human right as listed in the Universal Declaration of Human Rights, Article 19.

World Press Freedom Day was initially arranged in 1993 by the United Nation General Assembly as an initiative to reflect upon the freedom of press internationally. The day was marked on the jubilee of the Declaration of Windhoek, which is a statement of fundamentals of press freedom assembled in 1991 by the African Journalists to encourage a pluralistic and independent African press.

World Press Freedom Day celebrates the elementary principles of freedom of the press to assess the worth of press freedom worldwide and to protect media from attacks that are put on their independence. The day is also observed to salute those journalists who have lost their lives in line of duty.

It serves as an event to inform the citizens about the violations of freedom of the press- a reminder that in several countries across the world, publications are fined, suspended, censored and shut down, while editors, publishers and journalists are attacked, detained, harassed and even murdered. It stands as a date to develop and encourage initiatives in approval of press freedom and also to appraise the state of freedom of the press worldwide.

World Press Freedom Day is observed in more than 100 nations worldwide. The event ranges from cultural performances and demonstrations to round tables to determine the significance of press freedom. United Nations Educational, Scientific and Cultural Organization (UNESCO) coordinates the initiatives of several nations and most of the times serves as an organizing partner to foster the freedom of expression.

UNESCO also marks the day by conferring awards on deserving organizations, individuals or institutions that have made commendable contributions in the promotion and defense of press freedom in any part of the world, specifically when the achievement is made in the face of danger. Some of the examples of events held in recent year across the world are as follows:

While the number of journalists being attacked on duty has been reduced, it still goes on at an alarming rate. Investigate reporting has become extremely dreadful in India where 54 journalists were attacked and 7 lost their lives in the year of 2016-17. India is ranked as 136th in the world to be the worst country for journalism.

Therefore, Press Freedom Day is extremely vital in India to raise awareness about the essence of press freedom among its citizens. In fact, this year on World Press Freedom Day Media Institutions Act and both houses of the Parliament have passed a law for the protection of journalists while they are on their duties.

In India, Press Freedom Day is usually celebrated to salute the media professionals who risked their lives or sometimes even lost their life in the line of duty. Many government officers, civil servants and ministers take part in the day through various events like art exhibitions, award nights to honor those who risked their lives to bring news to the world, etc.

World Press Freedom Day is celebrated in South Africa with great enthusiasm. The day is a celebration of the commitment and hard work by the journalists in presenting life-changing information that allows people to understand their societies better. Each year, the Media Institute of South Africa (MISA) pays tribute to all those journalists who were murdered for their utmost commitment in South Africa and other parts of the world.

Commemorative celebrations are held in nine countries of South Africa. Usually, Press Freedom Day commences with a breakfast for editors, journalists, representatives of the diplomatic community, government officials and representatives of the civil society. MISA also releases its annual publication of media freedom.

Costa Rica has achieved the highest rank for press freedom in America. It is also ranked as 6th internationally in the recent press freedom index. The country is dedicatedly committed to press freedom and freedom of expression. As Costa Rica is relatively safe for the journalists and media professionals, the day is celebrated in the country to mark its success in the industry and to make people aware about the freedom of press. Various conferences, panel discussions and media events are organized to discuss on the issue of press freedom with media experts.

The Ministry of Internal Affairs, Argentina celebrates World Press Freedom Day by holding international seminars in accordance with the themes prescribed by UNESCO. It provides a space for exchange of dialogues between international experts and local officials including access to information and transparency. The event is generally open for journalists, civil society organizations representatives as well as the common public.

Apart from this, a special programme of news is broadcasted on TV channels of Argentina to mark the World Press Freedom Day in which special anchors interview the representatives and experts of the media industry. Other events like workshops, conferences and seminars are also organized for the day.

World Press Freedom Day is a crucial occasion to acknowledge the basic fundamentals of freedom of press, to protect media from attacks on independence and to salute the ones who have lost their lives in practicing journalism. In Cambodia, various conferences and events are organized to discuss on how the problems of media freedom can be prevented.

Large media campaigns are organized to spread awareness on the right to information wherein directors of civil society, government representatives and ministers of women affairs take part. Panel discussions are also organized to address on the challenges faced by the journalists and media.

India has been ranked very poorly on the list of the Press Freedom Index 2013, as released by the RWB-Reporters without Borders. It comes on 136th position out of the 179 listed countries in freedom of the press. While the ranking has been continuously reduced since the period of 2002, it still needs to do a lot in this direction.

Though our Indian constitution does not mention the word ‘press’ anywhere in the rights, it offers the right to freedom of speech and expression. Yet, this right is subject to certain restrictions for reasons of protecting the security, integrity and sovereignty of India. Laws like Prevention of Terrorists Act and Officials Secrets Act have been utilized in order to limit the press freedom.

Press Freedom Day offers a very good platform to raise awareness about the issue of press freedom in India. Here are some suggestions to celebrate the day in the country.

People must gather their friends and family members and organize events on spreading awareness about the freedom of press. People can also use #WorldPressFreedomDay on various social media platforms to raise awareness for the press freedom.

Government of India must collaborate with UNESCO and organize major events, conferences and seminars on the problems of press freedom in India along with its solutions. General public and journalists must be invited to attend those events.

A national action plan must be created for the protection of journalists. Aggression and murders towards the journalists must be treated as a cognizable offence.

Schools and colleges of the country must also initiate towards the celebration of the day by conducting small functions on press freedom, so that students gain knowledge about the day.

Since 1998, World Press Freedom Day started adopting different celebration themes every year by bringing together media professionals, press freedom organizations and UN agencies to access the state of press freedom worldwide and discuss solutions for addressing challenges. Each conference is based on a theme linked with press freedom, terrorism media coverage, impunity, good governance and media’s role in post-conflict countries.

Media plays a very crucial role in the development of any country. Common people are educated about what is going on in the society and about the issues and events which affect their lives. Thus, journalists and media experts must be given utmost safety while they are delivering their duties and also complete freedom of speech. Press freedom is a very serious issue and must be given due importance.

World Press Freedom Day serves as a platform to remind us the essence of preserving strong journalists at the time when they are facing increasing challenges. It also serves as an opportunity to call upon each and every pluralistic and independent media for global access to information and reserving freedom of the press in every aspect.