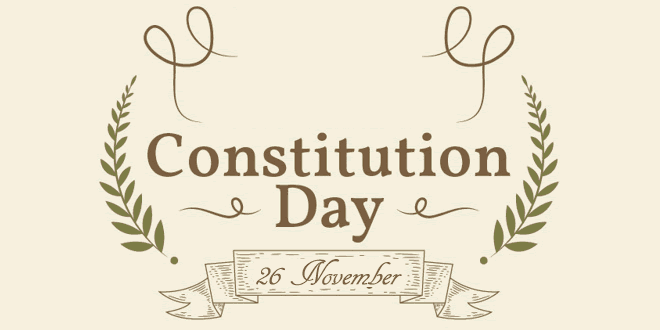 The Government of India declared 26 November as Constitution Day on 19 November 2015 by a gazette notification. The Prime Minister of India Narendra Modi made the declaration on 11 October 2015 while laying the foundation stone of the B. R. Ambedkar memorial in Mumbai. The year of 2015 was the 125th birth anniversary of Ambedkar, who had chaired the drafting committee of the Constituent Assembly and played a pivotal role in the drafting of the constitution. Previously this day was celebrated as Law Day. 26 November was chosen to spread the importance of the constitution and to spread thoughts and ideas of Ambedkar.

This day will be celebrated across the country by organizing various activities and programmes by all the private as well as government institutions. The schools and colleges commemorates the day by organizing mock parliaments, reading the preamble, essay writing competitions, speech and debate competitions.

One of the most important steps which have been taken on this day is that the Constitution will be made available in Braille script so that it becomes accessible to the visually challenged people. The joint initiative has been taken by the “Buddhist Association for the Blind”, “Saavi Foundation” and Swagat Thorat, who started the first Braille newsletter “Sparshdhyan“. Seeing the length and size of the Indian Constitution, the Braille statute will be made available in five parts.

Indian constitution was first described by the Granville Austin to achieve the social revolution. The ever lasting contribution of the Babasaheb Ambedkar towards the Indian constitution helps a lot to all the citizens of India. The constitution of Indian was adopted to constitute the country as an independent, communist, secular, autonomous and republic to secure the Indian citizens by the justice, equality, liberty and union.

Some of the following characteristics of the Indian constitution are:

Constitution Day or Samvidhan Divas in India is an officially celebrating event which is celebrated every year on 26th of November to honor and remember the father of Constitution, Dr. Bhimrao Ramji Ambedkar. People in India remember their history and celebrate independence and peace every year after launching the own constitution of India.

Constitution Day is not a public holiday. Various departments of the Government of India celebrated the first Constitution day. As per the Department of Education and Literacy, the preamble of the constitution was read in all schools by all students. In addition, there were quiz and essay competitions both online and offline on the subject of the constitution of India. There was a lecture on salient features of the constitution in each school. The Department of Higher Education requested various universities to arrange mock parliamentary debates in colleges, and the University Grants Commission (UGC) arranged an all-India quiz competition at Ambedkar University, Lucknow, where quiz winners of all states participated.

The Ministry of External Affairs directed all overseas Indian schools to celebrate 26 November as Constitution Day and directed embassies to translate the constitution into the local language of that nation and distribute it to various academies, libraries and faculties of Indology. The work of translating the Indian constitution into Arabic has been completed. Department of Sport arranged symbolic run named “Run for Equality”. There was also a special session of Indian parliament on 26 November 2015 to give tribute to the constitution and Ambedkar. The Parliament House complex was also illuminated on this occasion.

Since 2015 was the 125th birth anniversary year of B. R. Ambedkar (14 April 1891 – 6 December 1956), who is known as the architect of the Indian constitution, the government decided in May 2015 to celebrate this year “in a big way”. A special committee chaired by Prime Minister of India was announced for year-long celebrations. Various programmes will be held by various ministries and departments throughout the year to spread thoughts and ideas of Ambedkar. As part of the celebrations while laying foundation stone for an Ambedkar memorial at the Indu Mills compounds in Mumbai in October 2015, Prime Minister of India Narendra Modi announced that 26 November will be celebrated as “Constitution Day”. In November 2015, the government officially announced celebration of the day.