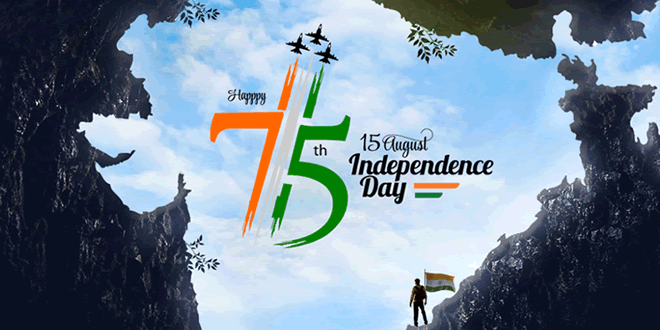 The Government of India decided to celebrate the 75 years of Independence of India, with great excitement and tribute to freedom fighters. So, they decided to do various programs and the government named the celebration as ‘Azadi Ka Amrit Mahotsav‘. Amrit Mahotsav meaning Nectar of grand celebration which signifies the 75 years of India’s independence from British Raj. The overall celebrations began on 12 March 2021 and will continue up to 15 August 2023.

In the usual ceremonial practice the Prime Minister of India hoist the flag from Red Fort at Delhi followed by speech on achievements and proud moments as a people of this country.

The individual states and cities of India will also celebrate the same at their local level. Thane, one of the popular cities of India has created its own version of Utsav 75 at Thane, which will be held from 12 to 15 August and spread all over the city. The celebrations include various programs, performances, various rallies, community carnivals, etc. On 31 July 2022, in Man Ki Baat Prime Minister of India urges Indians to replace their social media profile picture with the Flag of India. from 02 August to 15 August.

The government of India also started a campaign Har Ghar Tiranga where it is facilitating the delivery of a 20×30 inch National flag to every household at a subsidy rate of ₹25.

75 year of Independence , feel the liberty of our souls
No more boundation, only freedom prevails.
With enthusiasm and dignity, enlighten our mind,
The role of freedom fighters will never be defined.

The real nationalism lies in performing our duty,
My country needs love and that’s its beauty.
Every citizen is respected, this is always secured,
Diversity is spread and oneness is assured.

The firmness in pledges and varying new ideas,
The utter self sufficiency and meaningful self reliance.
Its time to awaken the nation ,its time to fulfilling the dream,
Let’s pray for global peace and make India supreme.