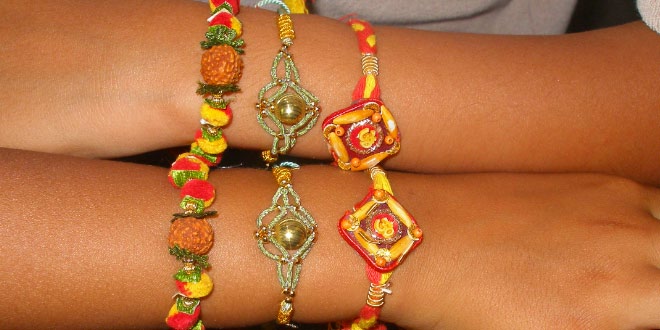 Raksha Bandhan Images, Rakhi Stock Photos: Raksha Bandhan in Sanskrit literally means “the tie or knot of protection“. It is an ancient Hindu festival that ritually celebrates the love and duty between brothers and their sisters. The sister performs a Rakhi ceremony, then prays to express her love and her wish for the well being of her brother; in return, the brother ritually pledges to protect and take care of his sister under all circumstances. It is one of the several occasions in which family ties are affirmed in India. It is observed in the Hindu calendar month of Śrāvaṇa, and typically falls in August every year.

Raksha Bandhan, also Rakshabandhan, or simply Rakhi, is a festival of the Indian subcontinent, or by people originating from the Indian subcontinent, and centered around the tying of a thread, talisman, or amulet on the wrist as a form of bond and ritual protection. The festive ritual is one principally between brothers and sisters, observed both before and after she gets married thereby marking her continued relationship with her natal home and brothers. The rite is also found between priests and patrons, and sometimes by individuals to real or potential benefactors. Differing versions of the rite have been traditionally performed by Hindus in northern India, western India, Nepal, and former colonies of the British Empire to which Hindus had emigrated from India in the 19th-century, and have included, in addition, rites with names rendered as Saluno, Silono and Rakri. The rituals associated with these rites, however, have spread beyond their traditional regions to much of India and have been transformed through technology and migration, the movies, social interaction, and promotion by politicized Hinduism, as well as as a occasion of national solidarity and state tradition.