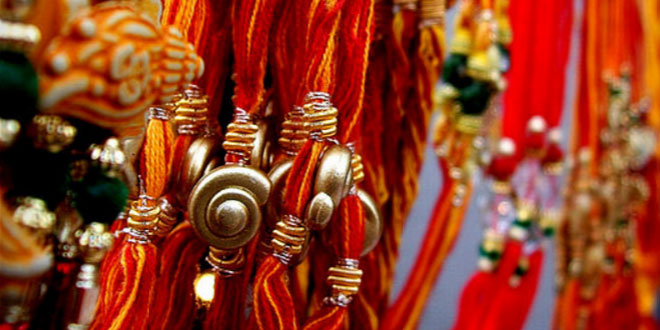 Rakhi Customs & Traditions in India: Raksha Bandhan is celebrated on ‘Shravan Purnima’ (full moon day of the Hindu month of Shravan), which generally falls in the month of August, every year. The auspicious day commemorates the unique bond between a brother and a sister. This festival reflects the pure love of brother and sister for each other. Every brother, even if far away, tries to reach his sister on this special day. It is a truly religious festival, which inculcates the performance of customs that are followed since ages. In many parts of India, sisters would tie Rakhi on their brothers’ wrist on a ‘Shubh-Muhurt’, the auspicious time of the day to perform the custom. Read on to know more about the customs of Raksha Bandhan.

As per Rakhi customs – on the auspicious occasion of Raksha Bandhan, sisters would decorate a puja thali (a plate). All the necessary pooja items including roli (for tilak), akshat (rice grains for tilak), diya or deep (for performing the aarti of their brother), sweets and the Rakhi are beautifully arranged in the thali. First, the sisters would put tilak on the forehead of their brother and then stick some of the akshat to the same tilak. Thereafter, they would perform an Aarti of their brothers. After that, they tie the Rakhi on the right wrist of their brothers. While performing the ritual, sisters generally chant the following ‘mantra’:

This is the blessings of a sister for her brother, which means:

“The sun radiates its sunlight; the radish spreads its seeds, I tie the Rakhi to you O brother and wish that may you live long.”

After her prayer for a long life for her brother, she says that she is tying the ever-protective Raksha to her brother’s wrist and chants the mantra:

This is a ‘mantra’ mentioned in the ‘Hindu Shastras’ and means:

“I am tying a Rakhi on you, like the one on mighty demon king Bali. Be firm, O Rakhi, do not falter.”

According to Rakhi customs – after tying the Rakhi, the sisters sweeten the mouth of their brothers with sweets. Then, it is brother’s turn to give some gifts to their sisters in return of the beautiful Rakhi. This gift can be either in cash or in kind. Sometimes sisters also give return gifts to their brothers. Thus, on the festive occasion of Rakhi brothers and sisters wish happy long life, success, prosperity and health to each other. At last they seek the blessings of their parents and other elderly people in their family. After that, they went to visit their relatives to enjoy this special festival with them.