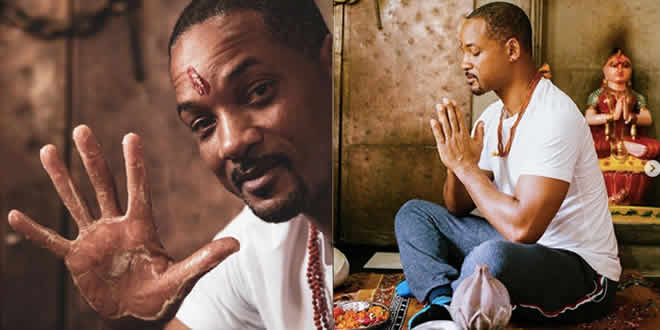 Will Smith has shared a series of new pictures and a video from Haridwar, where he took part in the Ganga aarti.

Actor Will Smith has shared a series of new images and a video from Haridwar (Uttar Pradesh), in which he appears to be taking part in the Ganga aarti. The actor wrote that his visit to India ‘awakened a new understanding’ of himself.

He wrote in an Instagram post Sunday, “My Grandmother used to say, ‘God Teaches through experience.’ Travelling to India and experiencing the colors, people and natural beauty has awakened a new understanding of myself, my art and the truths of the world.” The post has been ‘liked’ more than 1.5 million times.

My Grandmother used to say, “God Teaches through Experience”. Traveling to India & Experiencing the colors, people and natural beauty has awakened a new understanding of myself, my Art & the Truths of the world.

In the series of pictures, the Hollywood actor can be seen witnessing the ceremony, with a serene look on his face. There is a ‘tika’ on his forehead, and a garland around his neck. Other images show the actor at what appears to be an ashram, interacting with a ‘saadhu’.

It is unclear when these pictures are from. The actor last visited India in 2018, when he attended the Hindustan Times Leadership Summit, and fulfilled a bucket list item by taking part in a Bollywood song and dance number. The performance will be seen in the upcoming film Student of the Year 2, which stars Tiger Shroff, Ananya Panday and Tara Sutaria. Images and some behind-the-scenes video of Will’s dance has already been shared online, as part of his Facebook Watch series, Will Smith’s Bucket List.

Other videos showed him dancing to the song Radha Teri Chunri and having a blast with Ranveer Singh, with whom he chilled during his India trip. Will also congratulated Ranveer after the release of Gully Boy, in which Ranveer played an aspiring rapper.

The actor in a recent post shared glimpses of his ‘tuk tuk’ ride when he was in India. He wrote, “When you’re exploring India, there’s only one way to get around.”

The actor is one of the most popular stars in the world, and will next be seen as Genie in Disney and director Guy Ritchie’s upcoming live action Aladdin remake.