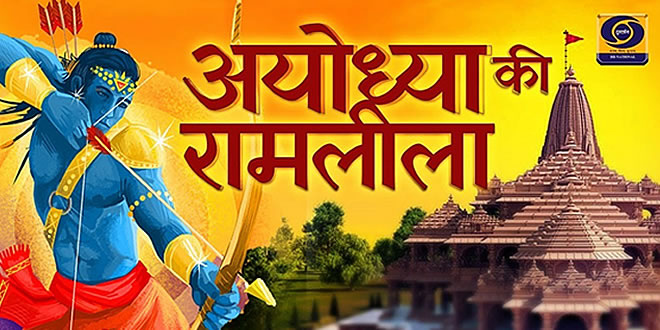 The city of Ayodhya is all decked up and is in a festive mood this Navratri as a grand Ram Leela is being held. Doordarshan is streaming Ayodhya’s Ram Leela, a theatrical enactment of the life events of Bhagwan Ram, live from Ayodhya this year. The broadcast by DD National, which started on 17th October, is happening in collaboration with the tourism and cultural department of the Uttar Pradesh government.

The live telecast of the event was launched by Neelkanth Tiwari, Tourism, Culture, Religious Affairs Minister of Uttar Pradesh, and Pravesh Sahib Singh Verma, MP Uttar Pradesh. It can be viewed on both TV and Youtube. Ram Leela runs for ten days and ends on Vijay Dashmi with ‘Raavan Vadh’ by Bhagwan Ram. The first episode on Youtube has already gained one million+ (ten lakh) views, while the second video has clocked over seven lakh views.

Every episode of Ram Leela runs for more than 2 hours and 45 minutes.

This year, the city of Ayodhya is hosting a star-studded, grand Ram Leela at Laxman Qila on the banks of the Sarayu river. Bollywood actors Asrani and Bindu Dara Singh are playing the roles of Narad Muni and Lord Hanuman respectively. Bhojpuri superstars and current BJP MPs Manoj Tiwari and Ravi Kishen are playing the role of Angad and Bharat. Popular actors Raza Murad and Shahbaz Khan are also playing important roles.

In March 2020, when a nation-wide lockdown was announced due to the coronavirus pandemic, Doordarshan had decided to bring back old television series to life, including Ramayana and Mahabharata. Ramanand Sagar’s Ramayan aired on Doordarshan for the first time between 1987 and 1988. The decision to re-run Ramayana attracted unexpected viewership for the channel, and it gained 7.7 crore views on 16th April. During the telecast, social media accounts were filled with stories of nostalgia and rediscovering Ramayana. Interestingly, the re-run had attracted viewers from all age groups.