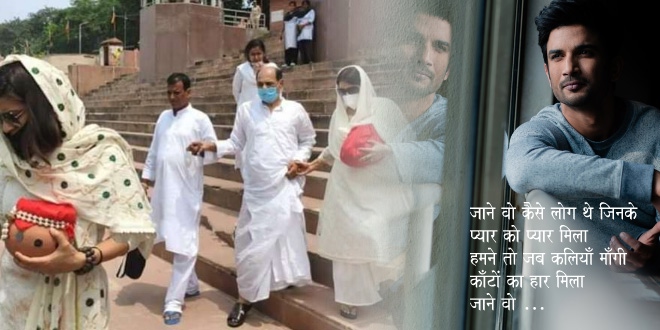 When Rhea also wants a CBI probe, then the court should put its stamp of approval on the same: family counsel of Sushant Singh Rajput.

Father of the late actor, Sushant Singh Rajput KK Singh, on Tuesday told the Supreme Court that Sushant’s family never saw his body hanging and this creates suspicion. Contending that the family does not trust Mumbai Police with the investigation into the case of their late son, the family counsel of late actor Sushant Singh Rajput said on behalf of the actor’s father that Mumbai police was taking the investigations into a completely different direction.

“The larger picture is that my client has lost his son,” he said, adding that the Mumbai Police did not listen to Sushant’s father and “took the investigations into a completely different direction”.

“His daughter could enter after the body was reportedly brought down. Nobody in the family has seen his body hanging,” he argued.

Mumbai police have summoned everyone, “except the real suspects or accused”: Father of Sushant Singh Rajput to the Supreme Court

Singh contended that the consequence of Sushant’s “exploitation”, and the criminal breach of trust and cheating all happened at Patna. “So Patna police have the jurisdiction to register the FIR under Section 179 of the CrPC,” he submitted, adding that there has already been a delay of many days in the case, and if more time passes, evidence will be destroyed.

“I am from Patna and without my son I have no one to light my funeral pyre. This itself shows that Patna has jurisdiction”, said KK Singh.

When Rhea also wants a CBI probe, then the court should put its stamp of approval on the same: Family counsel of the late actor

Asking the apex court to ensure that the home quarantine rule is not applicable to CBI officers. the senior counsel representing Sushants father contended: “Maharashtra Govt changes rules on August 3, a day after Bihar SP Vinay Tiwari was quarantined forcibly. It was to disable the investigation.” saying this Vikas Singh argued before the apex court that when Rhea also wants a CBI probe, then the court should put its stamp of approval on the same.

Meanwhile, the Supreme court asked Rhea Chakraborty’s counsel whether it wants CBI to investigate or not? To this Rhea’s lawyer said: “I want a fair investigation. I have a strong disquiet the manner in which Bihar made that recommendation and CBI took over. This matter must go to Mumbai first. And if the CBI has to come in, it could come later”.

Sushant’s Case: Murder And Coverup The Focus In Probe | The Debate With Arnab Goswami