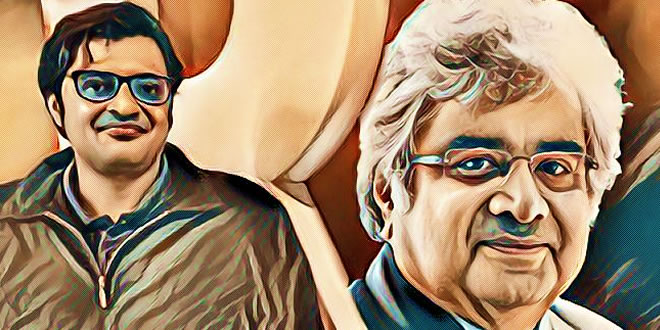 ‘Harish Salve did not charge a single rupee to represent me, I am deeply grateful’: Arnab Goswami on his first 9 PM debate back

After the Bombay High Court rejected the bail petition of Arnab Goswami, Harish Salve argued in the Supreme Court that no ‘abetment of suicide case’ could be made out against the Republic TV Editor.

On Thursday, Republic TV Editor Arnab Goswami expressed his heartfelt gratitude towards senior advocate Harish Salve on live air for representing the news channel in the Supreme Court and securing his bail in the 2018 abetment of suicide case. Arnab Goswami, editor-in-chief of Republic TV said this on his 9 PM debate, the first after he was released from Taloja jail following a witch-hunt by Maharashtra government.

The case pertains to the death of one Anvay Naik, who committed suicide in May 2018 alleging that Arnab Goswami had not cleared his dues worth ₹83 lacs. Even though the case was closed in 2019, the Maharashtra government reopened it in May this year to falsely implicate Arnab Goswami. In a statement, Arnab Goswami said, “I must place on record, my deepest personal and professional gratitude for the legal colossus. One of India‘s foremost jurists Mr Harish Salve, who fought with all his heart and knowledge for me. I am deeply grateful. We owe deep gratitude to Harish Salve.”

The Republic TV Editor further informed that Harish Salve had not charged a single rupee from the news network and appeared in the Court pro-bono. “I don’t know how many of you all know this but Mr Harish Salve does not charge us even one rupee for any of his valuable appearances for the court. He appears pro-bono for us. That is something I can’t even express my gratitude and thanks for,” Goswami emphasized.

Harish Salve had made a strong case in Supreme Court

After the Bombay High Court rejected the bail petition of Arnab Goswami, Harish Salve argued in the Supreme Court that no ‘abetment of suicide case’ could be made out against the Republic TV Editor.

“The person (Anvay Naik) was in financial difficulty and, thereafter, committed suicide but how can it be abetment to suicide. For abetment, there must be a direct and indirect act of the commission of the offence. If tomorrow, a person commits suicide in Maharashtra and blames Government, then will the Chief minister be arrested?” Harish Salve submitted before the apex court. The Supreme Court, while upholding an individual’s liberty, granted interim bail to Arnab Goswami and stated that the Bombay High Court was in ‘error’ for rejecting his bail petition.

On Wednesday, Supreme Court ordered the immediate release of Republic TV chief Arnab Goswami after it granted interim bail in connection with the suicide case filed against them by the Maharashtra government. A Supreme Court bench comprising of Justice Chandrachud and Justice Indu Malhotra hearing the petition said that Bombay High Court made an error in rejecting the application for grant of interim bail on technical grounds. Granting the bail to Arnab Goswami, the apex court also directed the Raigad police to ensure the compliance of the order of release of Arnab Goswami forthwith.

The Supreme Court also asked Arnab Goswami and two other accused to execute a personal bond for an amount of Rs 50,000 for release on interim bail. Justice Chandrachud, hearing the plea had made scathing observations saying, “If we don’t interfere in this case today we will walk on the path of destruction. If left to me I won’t watch the channel and you may differ in ideology but Constitutional courts will have to protect such freedoms”. Arnab was arrested last week by the Mumbai Police after it had reopened 2018 abatement of the suicide case of an architect, Anvay Naik.