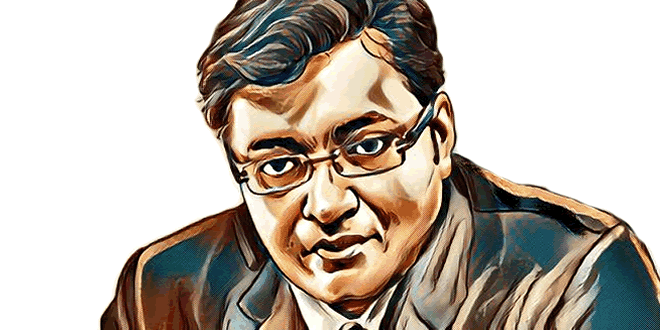 Arnab Goswami Biography: Arnab Ranjan Goswami is an Indian Journalist, TV news presenter and Editor-in-chief of the news channel Republic TV. He is also the president of the News Broadcasting Association. He started his career in Journalism in the year 1995 and is known mainly for his aggressive journalism.

Arnab Ranjan Goswami is an Indian Journalist, TV news presenter and Editor-in-chief of the news channel Republic TV. He is also the president of the News Broadcasting Association. His notable works include– The Newshour, Frankly Speaking with Arnab, The Debate With Arnab Goswami and the Nation Wants To Know. He started his career in Journalism in the year 1995. He is known for his aggressive journalism.

Arnab Goswami was born on March 7, 1973, in Guwahati, Assam to Manoranjan Goswami and Suprabha Gain-Goswami. Arnab’s father served the Indian Army and later on, joined Bhartiya Janata Party while his mother is an author.

Arnab Goswami’s maternal uncle Siddhartha Bhattacharya is the incumbent BJP MLA from Gauhati East constituency. He was also the head of the Assam unit of BJP.

He completed his B.A. (Hons.) in Sociology from Hindu College, University of Delhi. In 1994, he moved to England to complete his Master’s in Social Anthropology from St. Antony’s College, Oxford University. Arnab was a Felix scholar in Oxford. Arnab after returning from Oxford married his college love Samyabrata Ray Goswami and the couple have a son.

In the year 2000, Arnab was a Visiting DC Pavate Fellow at the International Studies Department at Sidney Sussex College, Cambridge University.

Arnab Goswami: Career as a Journalist

Arnab Goswami started his career in Journalism with The Telegraph in Kolkata and within a year moved to Delhi and joined NDTV. In NDTV, Goswami anchored ‘News Hour’ and simultaneously anchored ‘News Tonight’, which was telecasted for DD Metro. In 2004, Goswami won the Best News Anchor of Asia in Asian Television Awards for ‘Newsnight.’

On May 6, 2017, Arnab started his new venture Republic TV which was funded by Asianet. Asianet was primarily funded by Rajeev Chandrashekhar – the then independent member of Rajya Sabha who had links with BJP and was the vice-chairman of National Democratic Alliance in Kerala. He later resigned as the director of Asianet after joining BJP officially. Republic TV became the most-watched English news channel in India since its establishment for 100 weeks in a row.

On April 20, 2020, Goswami resigned as a member of Editors Guild of India on live television citing several reasons and accusing its President Shekhar Gupta.

Arnab Goswami is also an author of Combating Terrorism: The Legal Challenge. Arnab is a role model for many who want to do fierce journalism. He is a popular name amongst the English news viewers. What can be learnt from Arnab is the consistency and courage to raise questions.