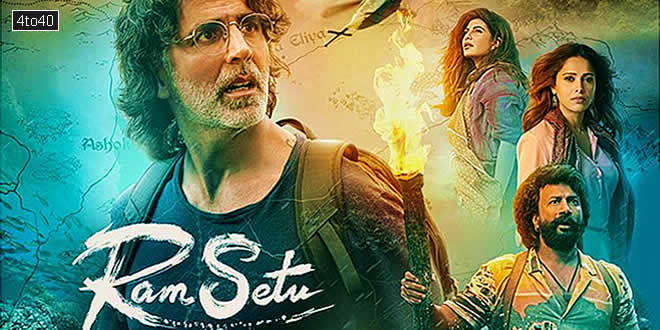 An atheist archaeologist turned believer must race against time to prove the true existence of the legendary Ram Setu before evil forces destroy the pillar of India’s heritage.

Ram Setu is an upcoming Indian Hindi-language action-adventure film directed by Abhishek Sharma. The film stars Akshay Kumar, Jacqueline Fernandez, Nushrratt Bharuccha and Satya Dev and follows an archeologist who is investigating the nature of Ram Setu, known in English as Adam’s Bridge.

The film was announced in November 2020 with the principal photography commencing in Mumbai on 30 March 2021. Production suffered setbacks and delays amid the COVID-19 pandemic. Filming resumed in October 2021 and wrapped up in January 2022 taking place near Ooty, Daman and Diu and Mumbai.

The film is scheduled for a theatrical release on 25 October 2022 during Diwali festivities.

The plot involves an archaeologist, who has set out to check out whether the bridge is a myth or a reality. According to the epic Ramayana (7th century BCE to 3rd century CE), Ram Setu is a bridge built by the god Rama’s army of Vanara to reach Lanka to rescue his wife Sita, who was abducted by Lanka’s Rakshasa king Ravana.

According to a report in The Financial Express, director Abhishek Sharma has been trying to build a plot since 2007 when he became aware of a court case involving Ram Setu. The film is co-produced by Akshay Kumar’s mother Aruna Bhatia and Vikram Malhotra under the production companies Kumar’s Cape of Good Films, Abundantia Entertainment, Lyca Productions and Amazon Prime Video. This is Amazon’s first Bollywood production in India. Aruna Bhatia died in September 2021. Chandraprakash Dwivedi was signed up as the creative producer. Kumar touted the film to be “a bridge between generations past, present and future“. Co-producer Vikram Malhotra, CEO of Abundantia Entertainment, touted that the film to be “a story formed on facts, science and historical heritage“.

In early March 2021, media reports confirmed that Jacqueline Fernandez and Nushrratt Bharuccha were signed up to play lead roles in the film opposite Kumar. In June 2021, Satyadev Kancharana revealed that he will be a part of the film marking his debut in Hindi cinema.

The official announcement of the film was made on 14 November 2020 coinciding with Diwali. Earlier reports in December 2020 suggested that the film shooting would take place in Ayodhya and in the proposed film city in Gautam Buddha Nagar district of National Capital Region in Uttar Pradesh. The muhurat shot followed by a puja ceremony by the team was held on 18 March 2021 at Ram Janmabhoomi temple in Ayodhya. A planned visit to Ram ki Paidi ghats in Ayodhya by the lead actors was cancelled due to a large uncontrolled gathering of people.

Ram Setu is a throwback to the Hollywood capers from a generation ago, when Harrison Ford or Nicholas Cage would go on a globetrotting adventure to uncover an ancient archaeological secret. Ram Setu takes that genre and blends it with Indian history, mythology, and socio-political commentary. The result is an enjoyable thrill-a-minute ride that is as fun as it is clichéd. But once you look past the flaws in logic, Ram Setu emerges as a fun popcorn adventure, the kind Bollywood hasn’t produced in quite a while.

Ram Setu is about a veteran archaeologist Dr Aryan Kulshreshtha (Akshay Kumar in long hair and a distinguished grey beard), a non-believer, who is tasked with disproving the reality of the Ram Setu, the bridge between India and Sri Lanka described in Valmiki’s Ramayana. However, he finds that the structure may actually be man-made, implying Lord Ram may be historical after all. The film is the story of how Dr Aryan dodges obstacles to find a lost trail in search for Ravana’s golden Lanka, helped by an environmentalist Dr Sandra (Jacqueline Fernandez) and a local Lankan guide AP (Satya Dev).

Akshay Kumar stars in this enjoyable action adventure that manages to overcome its flaws because of a fun story and amazing visuals.

First things first, Ram Setu is enjoyable. It is in parts slick and in other parts, quite thrilling. The credit for that goes to a good story backed by some of the best background score used in a Hindi film this year. The VFX and CGI are questionable indeed, as the trailer had indicated. The scenes with the diving suit are cartoonish, almost. But what makes up for that is the stunning underwater sequences. The way director Abhishek Sharma has captured the beauty and grandeur of Ram Setu under the Indian Ocean is reminiscent of BBC Earth’s Blue Planet documentary.

Ram Setu works best, when the protagonists are out on the field, in the thick of the action. As Dr Aryan and his comrades search for the historical evidence for Lord Ram’s tale, the viewer is engaged. But it falters the moment there is a lull in the action. We suddenly begin to notice how people can barge into the Supreme Court of India with an ‘I object milord’ and not get arrested (or shot). We notice how Akshay’s character is the only one doing any deduction and thinking and everyone else is just along for the ride, hardly contributing much. And we also notice small continuity errors, like Akshay’s beard changing into a stubble and then back again in successive scenes.

Akshay Kumar is given a golden opportunity in this film. His character – Dr Aryan – is unlike anything he has done in the recent past. He is an atheist, who needs to be converted to the cause. He looks different, talks different, and is conceptualized in a much different manner than many of his recent roles. His recent filmography has often been criticized to contain many public service announcements disguised as motion pictures. Ram Setu gives him a chance to do something different.

Sadly, the women in the film haven’t even been given that freedom to do something differently, or do anything at all. Jacqueline’s character is reduced to looking good and uttering some scientific terms every 20 minutes or so to justify her place on the ‘expedition’. Nushrrat Bharuccha fares even worse because her character is reduced to the shrieking wife, hardly contributing anything to the plot or the other characters. It is a letdown for the actor after a rather strong outing in Janhit Mein Jaari just a few months ago.

The surprise package of the film for me was Pravesh Rana. As the muscle to Nasser’s corrupt businessman, he is the film’s primary antagonist. And he plays that role perfectly, bringing enough menace and charm in what is essentially a filler role. The other highlight of the film is Satya Dev. Even though his character AP is written as a stereotypical Lankan with the clichéd accent, he brings through his performance enough charm and humour for the role to stand out. Between this and GodFather, the actor seems to be having quite a good year.

In tone and tenor, Ram Setu is similar to a sleeper hit from earlier this year – Karthikeya 2. That one was about finding the historicity of Lord Krishna and this one is about Lord Ram. The action, pacing, and other elements are also similar. But the films differ in scale. Ram Setu, with its reported ₹150-crore budget towers above the Telugu film, which was made in ₹30 crore as per reports. But it is, perhaps, a good thing that Ram Setu reminds one of a successful film from the south this year.

Ram Setu takes the best from the Indiana Jones and National Treasure schools of storytelling and injects some desi action in it. Sadly, it also injects Bollywood’s melodrama. Once you manage to look past all that though, Ram Setu takes you on a fun ride.