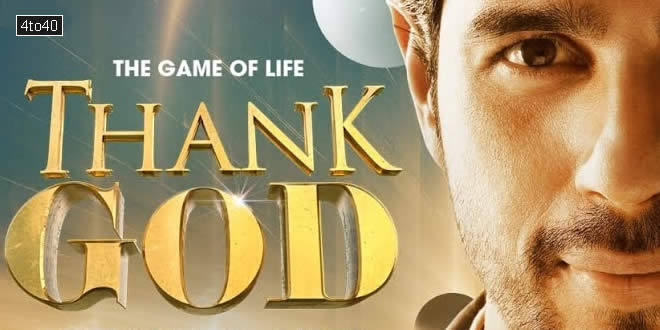 A couple of goofy, kind-hearted men as they try to reform society.

Thank God is an upcoming Indian Hindi-language fantasy comedy film written and directed by Indra Kumar with production by T-Series and Maruti International. The film features Ajay Devgn, Sidharth Malhotra and Rakul Preet Singh in the lead roles. The film is scheduled for release on 25 October 2022 coinciding with Diwali.

Veteran film director producer Indra Kumar, who has been enjoying a hit track record on BO since 1990 with Dil, followed by Beta, Raja, Ishq, Masti and Grand Masti, comes to the scene with official remake of Norwegian film Sorte Kugler – Thank God. His last film, Total Dhamaal, right before the pandemic in 2019, was a hit too.

The Ajay Devgn-Sidharth Malhotra-Rakul Preet Singh starrer has all the elements of formula hit – Maa hai, bahan bhi, jute marne wala baap bhi, giving and caring wife and a hero with too many flaws. Interestingly, plot bhi hai, duly tampered with a sizzling item number by Nora Fatehi. The story follows a real estate tycoon Ayaan Kapoor (Sidharth Malhotra), who is on the brink of financial collapse, an accident lands him in the court of CG (Chitragupt played by Ajay Devgn) that comes replete with apsaras, Devdoot and paap ka ghada.

A game is on to decide the fate, and our hero is found guilty of being a liar, greedy, lusty and short tempered. Would he find any redeeming qualities through this game that CG insists was played and copied by a superstar, who started his own show once back on earth after a brush with death.

Singham Ajay Devgn looks dashing as modern CG. Kind hearted, he is super helpful like leaving a body in a hospital where one needs kidney transplants. Sidharth Malhotra fits the mantle of this flawed hero. Rakul Preet Singh plays the Miss Goody Two Shoes being on point as a cop, wife, mum and a daughter-in-law. Seema Pahwa, Kiku Sharda and child actor Kiara Khanna do their part well. Some of the scenes and dialogues evoke laughter like the car scene wherein the aggrieved man insists that Ayaan be sent to Kalapani not jail or as devdoot wonders ‘Yeh guess kar raha hai ya brag kar raha hai’ as Ayaan lists off names of his girlfriends.

The film that opens on a comic note isn’t a standard Indra Kumar laugh riot but a typical family entertainer. A hefty dose of emotions and continuous tiptoeing between right and wrong, the comic turns super sentimental post the interval. Production quality is great, Mumbai with its Bandra–Worli Sea Link in the backdrop paints a pretty picture of the tinsel town and CGI is impressive. What doesn’t work is the film feels stretched and dated. May be two old hits – Manike, Hindi version of Sri Lankan Sinhala-language song, recomposed by Tanishk Bagchi and rewritten by Rashmi Virag and Dil De Diya Hai from Indra Kumar’s Masti (2004) are the culprit here.

If you like typical Bollywood fare that extols values of family and walking the right path, this maybe for you.