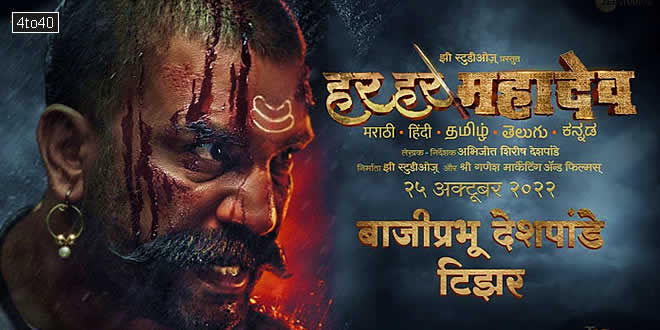 The film is about the inspirational story of a real battle in which only 300 soldiers, led by Baji Prabhu Deshpande, the commander of Chhatrapati Shivaji Maharaj.

The film is about the inspirational story of a real battle in which only 300 soldiers, led by Baji Prabhu Deshpande, the commander of Chhatrapati Shivaji Maharaj, fought off 12,000 enemy soldiers and won, albeit paying for the victory with their lives.

Baji Prabhu Deshpande was among the many warriors who joined Chhatrapati Shivaji Maharaj to realize his dream of ‘Swarajya’.

The audience will see the heroic saga of Baji Prabhu in Ghodkhind in Zee Studios’ upcoming film ‘Har Har Mahadev‘.
Ads by

The film, produced by Zee Studios, is to be released in five Indian languages – Hindi, Tamil, Telugu and Kannada, along with Marathi on October 25, this Diwali.

Chhatrapati Shivaji’s empire extended to South India. The sagas of Maharaj’s bravery and prowess are profoundly recalled and celebrated in the southern part of the country. This is the prime reason that the film ‘Har Har Mahadev‘ is also being released in Tamil, Telugu and Kannada languages for the audiences to celebrate Chhatrapati Shivaji Maharaj’s glory on the big screen.

The unit has also released a teaser of the film which gives a glimpse of the powerful story that the film is about to bring to audiences. The teaser carries a whole lot of fire to give a goosebumps-worthy experience.

Marathi film Har Har Mahadev has not just registered one of the best opening days for the industry but also outperformed Bollywood film Thank God in parts of Maharashtra.

Diwali has been fruitful not just for Hindi cinema but also for the Marathi film industry. On Tuesday, alongside Bollywood releases Ram Setu and Thank God, Marathi historical drama Har Har Mahadev was also released. The Sharad Kelkar-starrer has earned over ₹2 crore nett on its release day, which is among the highest openings for a Marathi film.

As per multiple trade sources, Har Har Mahadev earned between ₹2-2.2 crore nett across India on Tuesday, with the bulk of its earnings coming from the state of Maharashtra. In certain pockets in the state, it did better business than even Thank God, the Hindi film starring Ajay Devgn and Sidharth Malhotra that released on the same day.

Two other Marathi films released this year–Pawankhind and Chandramukhi also earned in the same range on their respective opening days. The fact that Pawankhind is the third-highest-grossing Marathi film of all time should be encouraging signs for Har Har Mahadev. The Marathi opening day collection record belongs to Sairat, which earned ₹3.6 crore on its release day in 2016. Riteish Deshmukh’s Lai Bhaari is the only other Marathi film to earn more than ₹3 crore on day one.

Given its positive word of mouth and historical appeal, Har Har Mahadev has the potential to breach the ₹40-crore mark, industry insiders say. It should be noted that only six Marathi films have ever breached that mark. Just how far Har Har Mahadev goes will completely depend on its first weekend and the way it holds after the crucial first Monday drop.