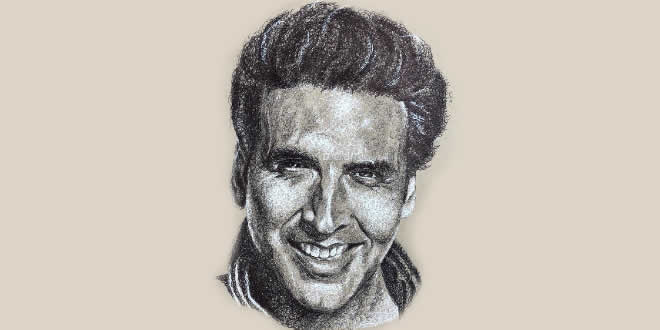 Akshay Kumar (real name Rajiv Hari Om Bhatia on September 9, 1967) is a popular Bollywood actor. Akshay Kumar was born in Amritsar, Punjab to a Punjabi family. His father was a government employee. From a very young age, he was recognised as a performer, particularly as a dancer. Kumar was raised in Delhi‘s Chandni Chowk neighbourhood before moving to Mumbai. In Mumbai, he lived in Koliwada, which was another Punjabi dominated area. He studied at Don Bosco School and then Khalsa College, where he participated in sports with Janpal Singh.

He studied martial arts in Bangkok and worked as a chef. He then came back to Mumbai, where he started teaching martial arts. One of his students happened to be a photographer and recommended him to do modelling. The student gave him a modelling assignment for a small company. For his two hours posing in front of the camera, he got Rs. 5,000, compared to his previous salary of Rs. 4,000 in one month. That was one of the main reasons why he chose to be a model. After a couple of months of modelling, Kumar was finally offered a lead role by producer Pramod Chakravarthy for the movie Deedar.

He studied martial arts in Hong Kong and soon decided to pursue an acting career in the Bollywood film industry. His first Bollywood film was Saugandh in 1991.

His first major hit was the 1992 film Khiladi. After this he often did many action films which were successful particularly the films with Khiladi in the title such as Main Khiladi Tu Anari (1993) and Khiladiyon Ka Khiladi (1996). He has also had success in romantic films such as Yeh Dillagi (1994), Dhadkan (2000) and Andaaz (2003).

In 2000 he starred in the hit comedy film Hera Pheri. After its success, he starred in many successful comedy films which include Awara Paagal Deewana (2002), Mujhse Shaadi Karogi (2004) and Garam Masala (2005).

Apart from his action, comedy and romantic roles he also displayed a flair for serious dramatic roles in films such as Ek Rishta (2001), Bewafaa (2005) and Waqt: The Race Against Time (2005).

He is also a brand ambassador for products and has toured with stage shows, doing singing and dancing. He led the Heat 2006 world tour which also had Saif Ali Khan, Preity Zinta, Sushmita Sen and Celina Jaitley. In 2008, the University of Windsor in Ontario, Canada conferred an Honorary Doctorate of Law on Kumar in recognition of his contribution to Indian cinema. In 2009, he was awarded the Padma Shri by the Government of India.

He has been romantically linked to a few of his female co-stars such as Raveena Tandon and Shilpa Shetty.

After being engaged to actress Twinkle Khanna, the daughter of veteran actors Rajesh Khanna and Dimple Kapadia, they finally married in January 14, 2001. Their son named Araav was born in September 15, 2002.

I can say with 200 % surety that this is the same AI Gaming Project which @itsSSR was working on.

Dear @akshaykumar, would you please share the original coding of this game with my team to investigate????? pic.twitter.com/GDH4hHMSoA

Are you talking about these Pakistani Faujis who are on ISI Payroll. pic.twitter.com/8sEKy1fJ3C