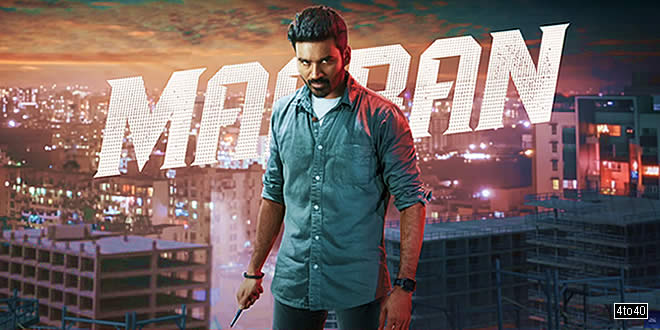 An investigative journalist is in trouble when he publishes an article that exposes bitter truths about a corrupt politician.

Maaran is an upcoming Indian Tamil-language action thriller film written and directed by Karthick Naren, with the screenplay and dialogues were co-written by Suhas–Sharfu and Vivek. Produced by T. G. Thyagarajan, Sendhil Thyagarajan and Arjun Thyagarajan of Sathya Jyothi Films, the film stars Dhanush and Malavika Mohanan, with Samuthirakani, Smruthi Venkat, Krishnakumar Balasubramanian and Mahendran in supporting roles. The music is composed by G. V. Prakash Kumar, with cinematography handled by Vivekanand Santhosham and editing handled by Prasanna G. K. The film is scheduled for a digital premiere through Disney+ Hotstar.

In February 2020, Sathya Jyothi Films announced a project with Dhanush, with the tentative title #D43 (the actor’s 43rd film in leading role). Karthick Naren was hired to direct, and G. V. Prakash Kumar was announced as the composer. The film marked Dhanush’s third project with the production company after Thodari (2016) and Pattas (2020). Arjun Thyagarajan, one of the producers, stated, “We were working with Dhanush on another film that was being directed by Ramkumar. But it’s a big-scale venture and we needed a lot of time for pre-production work. So, we thought we’d do another film with Dhanush in the interim and that’s how this movie came about”. Arjun had discussed with several directors for the project, before finalising Karthick Naren as the director. About Naren’s inclusion, he stated: “We’ve been in talks for six months. Karthick has grown from film to film, and this one will take him to the next level”.

In March 2020, screenwriter duo Suhas–Sharfu who worked in Malayalam films: Varathan (2018) and Virus (2019), were brought on board for co-writing screenplay of the film with Naren. Lyricist Vivek joined the technical team as the additional screenplay and dialogues writer; thereby making his debut in both the fields. The film was intended to start from May 2020, but the COVID-19 lockdown in India delayed the prospects of the launch. This resulted Naren to work on the pre-production during the extended period owing to the lockdown. The film’s title Maaran was officially announced with a poster release on 28 July 2021, coinciding with Dhanush’s birthday. An earlier film with the same title was released in 2002, and the makers had to obtain a no-objection certificate from that film’s producer.

In an interview with Ananda Vikatan, Naren stated that the film is an action thriller based on the backdrop of journalism, and he made the film due to his personal interest on the subject. His belief on social media being the greatest weapon used by people further motivated to make this film. Naren stated that apart from the social context, the film will also have commercial elements.

The music is composed by G. V. Prakash Kumar who is working with Dhanush for the fifth time, followed by Polladhavan (2007), Aadukalam, Mayakkam Enna (2011) and Asuran (2019), and his first collaboration with Karthick Naren. The songs were written by Dhanush and Vivek, who served as the primary lyricist for the album, featuring four tracks, and Prakash began composing for the soundtrack by March 2020 with two songs being completed. The composition process were completed within December. He was excited about the way, the songs were shaped up, and assured the fans that, the film will have a “solid album”. Prakash started working on the film score by December 2021.