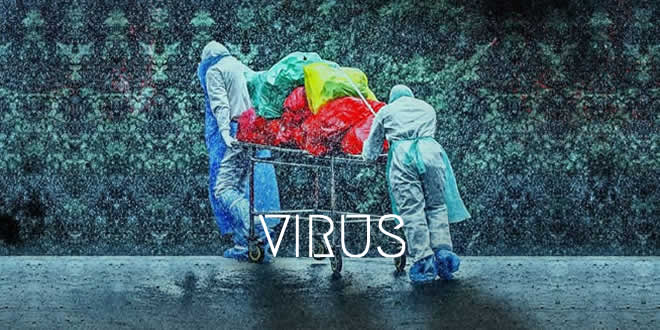 A real life account of the deadly Nipah virus outbreak in Kerala, and the courageous fight put on by several individuals which helped to contain the epidemic.

Principal photography took place from January to February 2019 in a single schedule shot extensively in Government Medical College, Kozhikode. The film was released worldwide on 7 June 2019, receiving critical acclaim and was a major box office success.

A man named Zakariya Mohammed is infected and is brought to the Government Medical College, Kozhikode where he suffers from the symptoms of an unknown virus and after a few hours dies. He passes on the virus to 18 other people out of which 16 including him die.

The film is based on the 2018 Nipah virus outbreak in Kerala. Principal photography began in Kozhikode on 6 January 2019, Kalidas Jayaram was supposed to appear in the film in a supporting but pivotal role, but was replaced by Sreenath Bhasi after the former did not ultimately accept it. Virus was shot extensively in and around Government Medical College, Kozhikode. Filming wrapped on 26 February 2019 after 52 days shoot in a single schedule.

While most of the net junkies are glued to Contagion and other such doomsday stories, we, at least the North Indian audiences, are missing a very significant Indian film. Virus it is, the fourth highest-grossing Malayalam film of 2019 in the US. Unlike its western and even Asian counterparts, Virus does not prophesise, predict or foretell. It’s no sci-fi that revels in its futuristic projections and the director, writer can’t gloat over their premonitions, “We told you so”. Yet there is a lot they and the film can boast of.

Based on the 2018 Nipah virus outbreak in Kerala, this 2019 film is telling in many ways and one can draw parallels with the current situation. How the medical fraternity and the local administration track the patients’ contact history is not merely or even eerily similar to what is happening in the context of coronavirus.

Simultaneously, it also underlines how much effort, precision, intelligence and judgment of an alert mind it takes to connect the dots. Miss one link and the entire edifice of planning and, thus, treatment could go for a toss.

Sure it focusses on a real incident and is woven around the tragedy unleashed by the Nipah virus in the coastal state of Kerala. Though primarily taking off on facts, it is no documentary. Rather it is replete with dramatic tension, builds up the tragedy and opens and moves on like a procedural medical thriller. Taking you in and out of the lives of those affected and those planning to tackle it, it holds your interest, makes you wonder and invariably sends a chill down your spine.

Just as we are witnessing a host of conspiracy theories right now, Virus too throws in a probable terror angle. The religious angle, which often tends to divide us in the face of adversity when humanity should ideally unite on all fronts, too is explored. How Revathi as the health minister and her team hold their ground, refusing to succumb to pressure from the Centre is one of the major highlights of the narrative.

Is the virus a biological weapon? The question assumes significance and even becomes foreboding. Needless to add, the film’s heart and intentions are just in the right place. So is the realistic treatment, refusing to pander to the star value of its stellar cast, including Parvathy. Playing Dr Annu, based on a real-life character whose findings on the epidemiological links hold the key to cracking the connection code, she is central to the narrative. But not even once overpowering others or the story of the virus.

Besides, in the trying times that we or rather the world is right now, Virus has many lessons for us. Victims being targeted and accused of devious designs is just one of them. Insinuations being made on the basis of religion is another ticklish point that raises its head.

When the mother of patient zero, Zakariya (Zakariya Mohammed) says, “It is because of my son that so many have died,” you can’t help that lump in your throat. The final inspirational message is even more gratifying and heart-warming.

Revathi’s fine portrayal as the minister for health busts the myth that political leaders are always heartless. Streaming on Amazon Prime, for non-Malayalam speaking, the Hindi bhashi that is, the language could be an impediment. But with apt subtitles, there is little you can miss. And miss you shouldn’t, for it will not only fill you with optimism and hope but also define your role in the given circumstances, which is basic human decency. Viruses can be both contagious and fatal, but with indefatigable human spirit, these can be endured and conquered. Could there be a more heartening thought than this in this lockdown? Besides, all of us who are scrounging for answers in n number of bizarre conspiracy theories doing the rounds, well the answer could be as basic as the film projects.

Previous Rama & Ramayana Quiz for Kids
Next How is Easter Celebrated in Bulgaria?