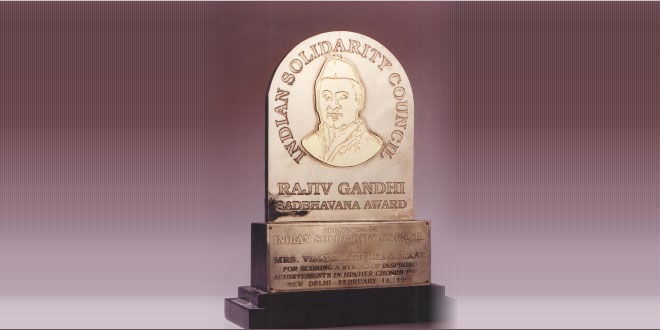 The Rajiv Gandhi National Awards is distributed at this day by the Rajiv Gandhi Foundation in order to know the distinction attain by the competitors in different fields.

Rajiv Gandhi National Sadbhavana Award is an Indian award given for outstanding contribution towards promotion of communal harmony, national integration and peace. The award was instituted by All India Congress Committee of the Indian National Congress Party (INC), in 1992 to commemorate the lasting contribution made by the former Prime Minister Rajiv Gandhi, carries a citation and a cash award of Rs. 10 lakhs. It is given on 20 August, the birth anniversary of Rajiv Gandhi, which is celebrated as Sadbhavna Diwas (Harmony Day).