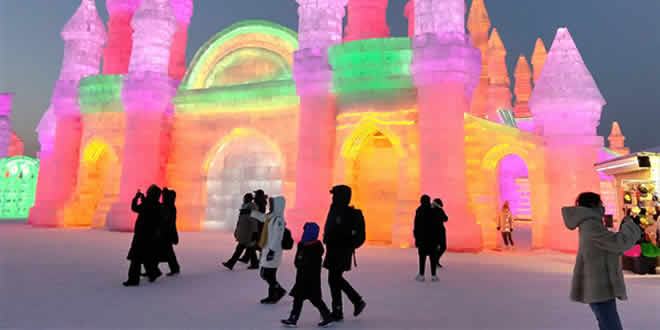 Where is the annual Ice Festival in China held?

The annual Ice Festival is held in Harbin, northern China, and the capital of the Heilongjiang Province. Harbin is known for its very cold winters. The month-long festival starts on January 5. Harbin’s Ice Festival is one of the world’s four largest Ice and Snow Festivals, along with Japan’s Sapporo Snow Festival, Canada’s Quebec City Winter Carnival and Norway’s Ski Festival.

The Harbin International Ice and Snow Sculpture Festival is an annual winter festival that takes place with a theme in Harbin, Heilongjiang, China, and now is the largest ice and snow festival in the world. At first participants in the festival were mainly Chinese, however it has since become an international festival and competition, with the 2017 festival attracting 18 million visitors and generating 28.7 billion yuan ($4.4 billion) of revenue. The festival includes the world’s biggest ice sculptures.

Officially, the festival starts on January 5 and lasts one month. However, exhibits often open earlier and stay longer, weather permitting. While ice sculptures are erected throughout the city, there are two main exhibition areas:

During the festival, there are ice lantern park touring activities held in many parks in the city. Winter activities during the festival include Yabuli alpine skiing, winter-swimming in the Songhua River, and the ice-lantern exhibition in Zhaolin Garden.

Previous Who was the founder of modern China?
Next Where does china come from?