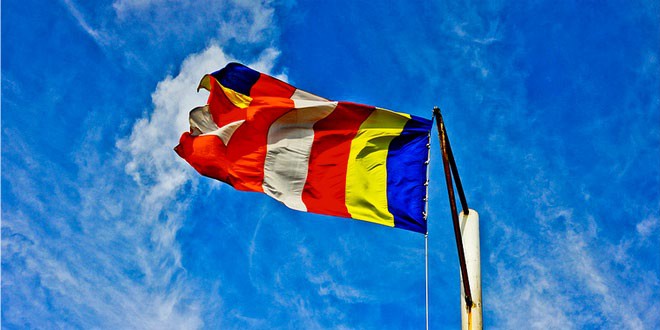 What is the meaning of the Buddhist flag?

The Buddhist flag, or the flag of Chabbannarangsi, as approved by the World Fellowship of Buddhists at its inaugural conference in B.E. 2493 (1950) consists of six colours. The first five colours are arranged vertically as follows: blue, yellow, red, white, and orange. The sixth colour, called in Pali “Pabhassara”, which means “brilliant” or “radiant”, cannot be depicted but is symbolised by the combination the first five colours arranged horizontally in a narrow strip on the right.

This six-coloured flag was originally designed by Colonel Henry S. Olcott, an American Buddhist, and has been used by the Sri Lankan Buddhists ever since. However, it gained wider recognition when it became the official flag of the World Fellowship of Buddhists at its inception in B.E. 2493 (1950).

The design was based on the belief that wherever the Buddha went, he spread the light of wisdom and bliss to the people all around in six directions, namely, east, west, north, south, above and below. This light was later symbolised by the six colours in the Buddhist flag.

However, for Thai Buddhists, a yellow flag with the symbol of the Wheel of Dhamma (Dhammacakka) has been in general use since B.E. 2501 (1958) when it was officially proclaimed by the Thai Sangha Authorities.