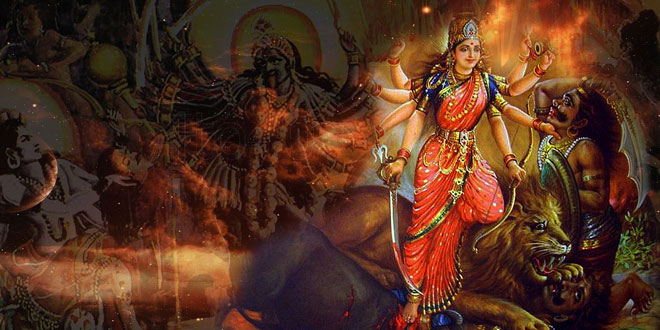 The most popular legend has it that a demon named Mahishasura obtained a boon from Lord Brahma in disguise of a buffalo according to which he could not be killed by any man on the earth. Overconfident, he started committing atrocities on the people and set out to win all the three lokas (Worlds) and made everyone live in perpetual fear of his fiery temper and even drove Indra (Lord of Gods) out of his kingdom.

Legends of Navratri: Story of Mahishasura

To put an end to the rising sins of Mahishasura all the three supreme deities of Hindus – Brahma, Vishnu and Shiva combined their powers and formed Durga – A female goddess whose charm and beauty made Mahishasura except her challenge to fight in a battle which continued for nine long days. At the end of the 9th day Mahishasura was defeated and since then the nine days of the battle are celebrated as Navratri and the tenth day is celebrated as Vijaya Dashmi which marks the victory of good over evil.

Story of Lord Ram and Ravana

The tenth day of the festival is apparently also the day when Lord Ram defeated Ravana and won Sita back and this day is celebrated as Dussehra. The nine days prior to Dussehra in India witness Ram Lilas in different parts of the country where actors enact the historical scenes from the Ramayana.

According to another belief Uma who was beautiful and virtuous daughter of King of Himalayas wished to marry Lord Shiva and as a result of her immense devotion managed to convince Lord Shiva to marry her. But when her father met lord Shiva on the day of the marriage of his daughter he disapproved of him because of his appearance. Uma could not stand insult of his beloved and jumped into the agnikund. However, she was born again and married her lord. It is believed that since then, Uma visits her parent’s home every year since then at the Navratri with har companions which include Ganesh, Kartik, Saraswati and Laxmi and two of her best friends or ‘sakhis‘, called Jaya and Bijaya.