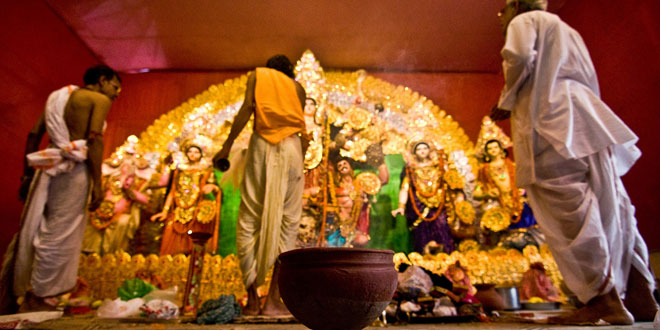 On the ninth day of the Navratri, goddess is worshiped as Durga and offered sugarcane stalks. Kanya Puja is also practiced on this day in different parts of India like Punjab, Haryana, Uttar Pradesh and Bihar. In Kanya puja, nine young girls (who have not attained puberty) are invited in houses and are feasted with puri, chana ki sabzi, kheer and halwa. These girls are treated as nine forms of the goddess and are honored by washing their feet and putting tilak on their forehead. Devotees also present them certain gifts like clothes and fruits.

In Kerala, Saraswati puja is practiced on ashtmi, a day before Maha Navami. The Maha Navami day is treated as resting day. People don’t begin new activities on this day and children don’t even study on this day.

The celebrations of Navratri end on Ashtmi instead of navami in some parts of Kashmir, Haryana, Uttar Pradesh and Maharashtra. Ashtmi, the eight day of Navratri is also considered as the birthday of Parvati, the form of Durga.

The last and the final day of Navratri: