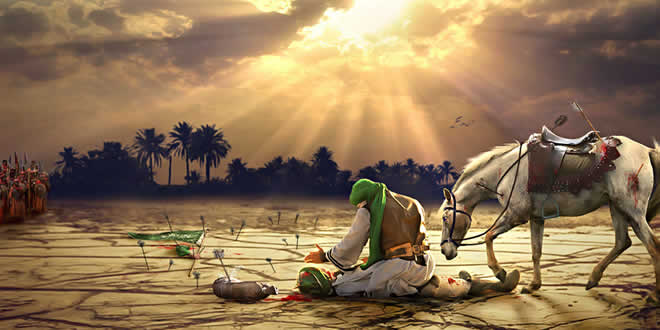 Muharram: What is the tragedy at Karbala? In the month of Muharram many centuries ago, (approximately October 20th 680 A.D.), an event took place in Iraq (Asia) at a place known as Karbala on the bank of the river Euphrates.

A large army, which had been mobilized by the Umayyad regime, besieged a group of persons numbering less than a hundred and put them under pressure to pay allegiance to the Caliph of the time and submit to his authority. The Caliph was a man much taken with earthly pleasures that deviated from the Islamic way of life. The small group resisted and a severe battle took place in which they were all killed. The leader of the small band of men who were martyred in Karbala was none other than Hazrat Imam Hussain, the grandson of the Holy Prophet.

Hazrat Imam Hussain’s martyrdom at Karbala represents a conscious confrontation with anti-Islamic forces and a courageous resistance for a sacred cause. The tragedy was that the one who stood up to defend Islam was cut down in so cruel a manner. It is for this reason that the death of Hazrat Imam Hussain is mourned annually in the Muslim world.

Previous Mother Teresa Biography For Students, Children
Next How is Muharram observed?