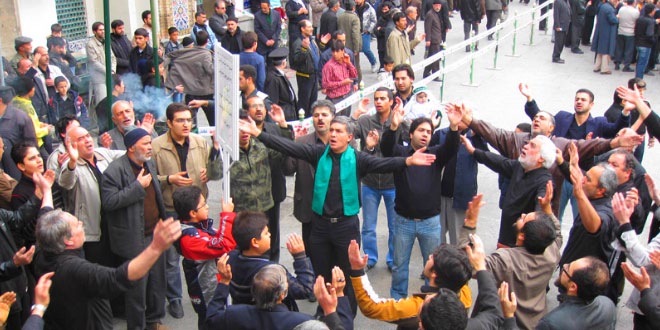 Muharram, the first month of the Islamic calendar, begins with mourning processions all over the world. Muslims of Shia sect, in black attire, participate in the gatherings in which the sacrifices of Hussein and his companions are commemorated.

Hussein, the grandson of Prophet Muhammad, was martyred in 680 AD by a group of 72 men, women and children in the harsh terrain of Karbala, Iraq, Asia.

On the seventh day of the Muharram, the food, water and other essential supplies to the Hussein’s camp was ceased by the Yazid’s army. During these three days he (Hussein) witnessed the torture, execution of his companions, including his brother Abbas and newly-wed nephew Qasim ibn Hassan.

Hussein also lost his two sons – Ali Akbar and six-month-old Ali Asghar – on the 10th of Muharram. On the very same day Hussein too fell to the bows and arrows of the Yazid’s cavalry on the battle field of Karbala. His body was trampled under the hooves of the horses.

On the 10th of Muharram, also known as Ashurah, Hussain along with his companions were martyred. Hussein being the last soldier to fall.

Hussain was martyred after he refused to pledge allegiance to Yazid, son of Muawiyah ibn Abu Sufyan. For the legitimacy to his sultanate, Yazid, despite his misdeeds, urged Hussein to vow allegiance. Hussein not only rejected this but also demanded that Yazid revive Islamic values and ethics.

What Yazid wanted was to crush dissent and get rid of the opposition. The only way to thwart him was to keep the memory of dissent alive. We would do well to remember this.

Muharram is all about remembering. It is a salute to those who chose death over life. But it is definitely not about merely feeling their pain. It shouldn’t be reduced to ritual enactments of shedding blood. It certainly shouldn’t be about picking a side or a name to hate.

The message of humanity and selflessness outweigh the tragic aspect of Hussain’s revolution. Although he was mercilessly martyred, his blood decorated the episode of Karbala to portray sacrifice for revival of humanity and moral values.

In his own words: “I have taken this stand not out of arrogance or pride, neither out of mischief or injustice. I have risen to seek reform in the community of my grandfather. I would like to bid good, forbid evil and follow the tradition of my grandfather and my father. Can’t you see that the truth is not followed and the falsehood is not shunned? In such circumstances, a believer should desire to meet Allah. Surely I regard death as nothing but an honor and life with oppressors as anything but disgrace”.

Many lessons can be learnt from Hussein – learn to be brave, resilient and firm just as Hussain and his companions were; that it is better to die with dignity than to live in humiliation; that our rights can be defended even in the face of death. True faith is tested in the hardest of adversities. Life can be sacrificed for a just cause.

As Mahatma Gandhi said about Hussein: “My faith is that the progress of Islam does not depend on the use of sword by its believers, but the result of the supreme sacrifice of Hussein. I learned from Hussein how to achieve victory while being oppressed”.

During mourning, the Shia Muslims recite Salaam, a salutation to the martyrs (of Karbala), Soz (sorrow and grief), Marsiya (lamentation for a departed soul) and Noha (Elegy depicting Hussein’s martyrdom).