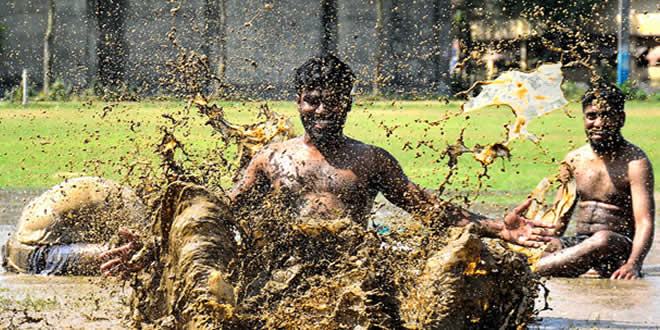 How is Holi Celebrated? During Holi, people clean their houses and remove clutter, thereby ensuring flow of positive energy. Disease-breeding bacteria are thereby destroyed. The sanitary condition of the locality is improved. People smear each other’s faces with colored powder known as ‘Gulal‘ and ‘Abeer’ and throw colored water or ‘Rang’ on each other joyfully. People play practical jokes with passers-by. They take out processions on streets that feature folk songs and dances. Food preparations begin many days in advance, with assemblage of gujia, papads, kanji and various kinds of snack items including malpuas, mathri, puran poli, dahi badas, which are served to Holi guests. The ‘Bhaang’ (opium) drinks are very popular among people and it is the favorite festival drink. During this festival, different waves of radiance traverse the universe, thereby creating various colors that nourish and complement the function of respective elements in the atmosphere.

How is Holi Celebrated?

Holi celebrated to welcome spring. The advent of spring symbolizes rejuvenation, new beginnings and everything in life that is optimistic, sunny and brimming. Holi also has a share of mythical stories as the other Indian festivals. Also known as the festival of colors, the festival relates to the legend of Holika. The date of this festival varies as per the Hindu calendar every year. Earlier, this festival was only celebrated in India and Nepal. In recent times, it is celebrated all over Europe and North America where there is a huge Indian population.

Most Indian state has their own way of celebrating Holi. The celebration begins with Holika bonfire on the night before Holi. People gather, sing and dance around the bonfire and pray for the safety of their loved ones. The process of bonfire is the same all over. The next day of Holi begins early morning where people are free to play with colors. Participants play, chase and color each other with dry powder and colored water, with some carrying water guns and colored water-filled balloons for their water fight. This celebration is accompanied with songs and dance in a colorful and joyful atmosphere.

People visit family and friends to throw colors on each other; laugh and chit-chat and then share Holi delicacies i.e. food and drinks. Bhang is mixed into drinks and sweets and consumed by many to enjoy the day. Bhang is prepared by mixing the leaves and flowers of the female cannabis plant. It has been consumed as a beverage since ancient times during this festival. In the evening when the celebration ends, everyone sobers and returns to their chores.

Previous What are Holi Safety Tips?
Next In the past, people used to make Holi colors from which flower?