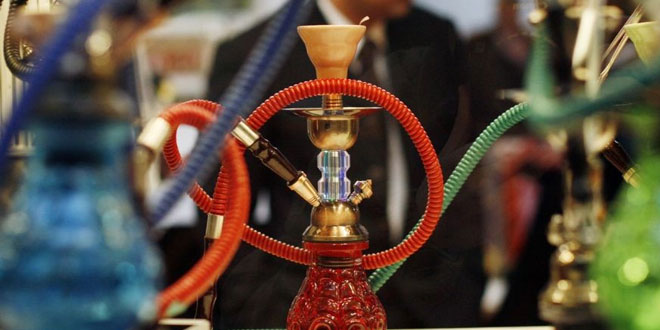 Most Saturday nights, you’ll catch businessman Jairaj Singh chilling with friends at a neighborhood lounge, drinking and passing on the hookah. “Hookah smoking is all about style,” says the 25-year-old Singh. At another lounge, engineering student Rishabh Singh, 22, is equally hooked on as he takes a long puff. “I love the smooth taste,” he says.

One of the cardinal rules of hookah or sheesha smoking is sharing, points Rajneesh Malik, owner of Hookah Bar and Lounge in Vasant Vihar (New Delhi). “After every puff, you pass it on to the next person,” he says. Because, explains, Malik: “It is not just about smoking, it’s a part of socializing.”

City hookah lounges offer more than 120 flavors. So you have flavors like apple, strawberry, peach, banana, mint, rose and coffee. There are also lounges that create special flavors for their customers. At the Hookah Bar in Defence Colony, for instance, you can order a special hookah, in which the water of the sheesha is also flavored.

Lokesh Sukhija, owner of the lounge, says; “Its USP is that with hookahs you don’t suffer any off the ill effects of cigarette smoking. It’s pretty safe,” he tells you. Hookahs do have tobacco in them, but the amount is very less, apparently. And as the experts tell you, you are not supposed to inhale. So, you don’t get a high, either.

What the hookah does is ward off stress, as Dhiraj Arora, owner of Shalom informs you. “It does not give you a high, but it ca give psychological relief to a smoker,” adds Arora. “What is perhaps the most appealing aspect is that it is not addictive like cigarette smoking,” says Sukhija.

There are certain rules for smoking a hookah, and don’t ever let a professional smoker catch you lighting up the wrong way. So the next time you light a hookah, remember these cardinal rules…

With discos and pubs getting noisier and crowded, hookah bars are becoming the latest haunt of the discerning class. With their swanky, uptowns, styling, they are clearly the winners by all standards. “You don’t just go to smoke the hookah, you go to unwind,” says Jairaj.

An evening at a hookah bar is much more than just smoking your favorite sheesha. Owners are constantly adding new ingredients to make a wholesome package: you can have scrumptious Mediterranean cuisine on your table, or you can also enjoy a beautiful belly dance on a weekend.

“The party culture has changed for the better,” says Rishabh. Just the other day, when I took my friends from Meerut to a hookah bar, they could not stop talking about the belly dance and the good time they had.”

With comfortable yet luxurious floor cushions that you can sink into, these bars satiate all your senses.

You cannot help but get enveloped in the rising smoke of the hookah and get transported to a whimsical land. Back to the old days, when only royalty had access to such an affair.

Hookah Smoking: How It All Began

As they say, there is no smoke without fire. Let’s go back to where it all began. A Jordanian riddle evokes the feminine sheesha figure: “Who is this princess standing in her palace with her hand on her hip?” The baluster body, elegant and rounded, indeed evokes the shape of a woman; the pipe bowl is similar to a crown. As for the hose curve coiling up around the mast, it can easily be compared to the arm outline. Finally, the palace is a metaphor for the atmosphere in which a sheesha session ideally takes place: pillows, tapestries, vegetation, and so on.

For the genuine sheesha buff, the initiation is through premium Egyptian tobaccos. In any casbah of West Asia, the sheesha man delivers a tray of tobacco capsules to the table, that enables the guest to check out the aroma of each one until he settles for one.

During the hookah delivery, the hookah man arrives at the table with a special hand potion. This could be a special Turkish potion or Egyptian, even some local stash. It is first gently poured into the palms to stimulate the senses. This apparently prepares the guest for the ultimate smoking experience.

The origins of the hookah come from the north western provinces of India, along the border of Pakistan in Rajasthan and Gujarat, nearly a millennia back. These hookahs were simple, primitive and rugged in design, usually made from a coconut shell base and tube with a head attached. They were for smoking opium and hashish. The hookah made its way through the Persian Kingdom, which included Pakistan, Afghanistan, much of Middle Asia and Arab parts of Northern Africa. In the middle-east, hookah architecture evolved to ornate crystal and earthenware. Later, brass and steel were introduced and it didn’t take along for the hookahs to become a form of artistic expression, and a form of social smoking.