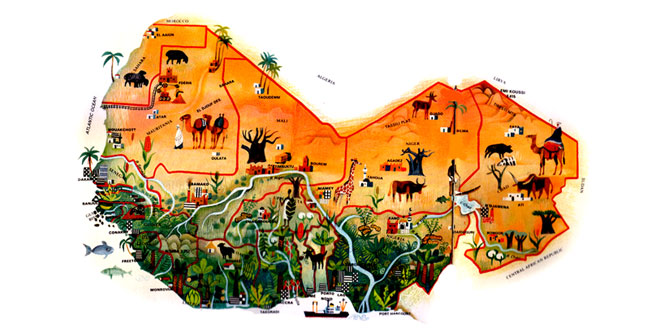 Mali’s characteristic table mountains (or mesas) descend to the lowlands of the River Niger. The northern part of the country is desert, while the south is bushy savanna.

Agriculture is concentrated in the valley of the Niger which has several channels here. The chief cash crops are cotton, maize, groundnuts, manioc and yams.

Sheep and goats are raised although the Tuaregs also raise cattle. Some livestock is exported.

Mali has deposits of phosphates, manganese and iron ores, gold, rock salt and marble. The industry is mostly concerned with food processing, but there is also some engineering (assembly of television sets and bicylces, etc.)

The country has several major roads and a single railway line connecting Bamako and the port facilities at Dakar in Senegal.