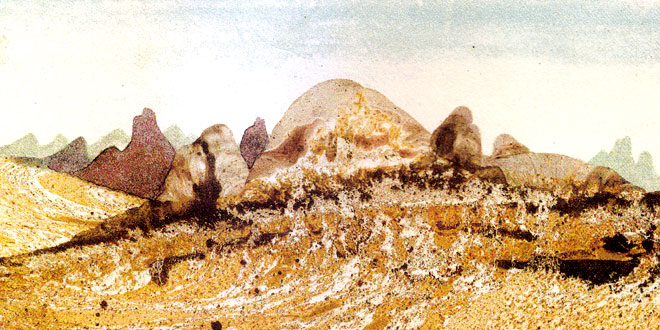 The largest area of this big north African country is occupied by the Sahara desert, a vast wasteland of sand and rock. To the north rise the Atlas Mountains, while the south is dominated by the isolated volcanic range known as Hoggar (Ahaggar). Many shallow depressions contain salt lakes known as chotts.

Only the narrow coastal belt and the oases are suitable for farming. The traditional crops are cereals, sugar beet, citrus fruit, olives, dates, figs, tobacco and grapes. Fishing is quite important to the economy; the chief hauls are sardines, mackerel, herring and tuna.

Algerian economy depends on oil and natural gas which amount to some 90 per cent of its exports. At present, the world’s largest gas liquefaction plants are under construction in the ports of Skikda and Arzev. Other important natural resources include iron, lead and zinc ores, phosphates and bituminous coal. The food-processing industry is the second largest after mining.

Roads and railways are concentrated within the coastal area but there are also roads crossings the Sahara and connecting Algeria with Mali and Niger. Pipelines deliver oil and gas to ports on the coast. The biggest seaport of the country is Algiers, the national capital, followed in size by Oran. The country has 65 inland airports and landing-strips.