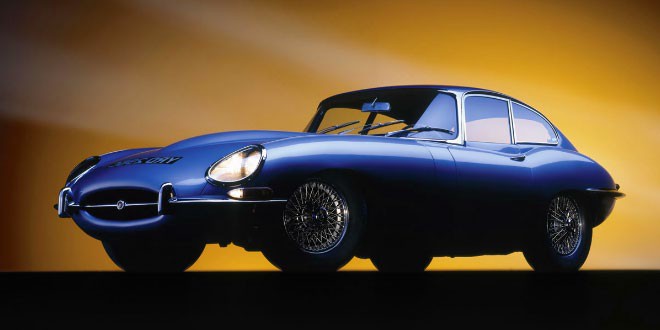 The Jaguar E-type or XK-E is an automobile manufactured by Jaguar between 1961 and 1974. The E-type revolutionised sports car design, with performance, handling and looks ahead of its time. It was priced well below competing models, helping it to high sales for a high performance car. In excess of 70,000 E-types were sold over 14 years. In 2004, Sports Car International named this car number one on the list of Top Sports Cars of the 1960s.

The E-type was initially designed and shown to the public as a grand tourer in two seater coupé form (FHC or Fixed Head Coupe) and as convertible (OTS or Open Two Seater). The 2+2 version with a lengthened wheelbase was released several years later. The model was made in 3 distinct versions generally referred to as “Series 1”, “Series 2” and “Series 3”. A transitional series between Series 1 and Series 2 is known unofficially as “Series 1½”.

The “’Lightweight’ E-Type” which was apparently intended as a sort of follow-up to the D-type. Jaguar planned to produce 18 units but ultimately only a dozen were reportedly built. Of those, one is known to have been destroyed and two others have been converted to coupé form. These are exceedingly rare and sought after by collectors. The “Low Drag Coupe” was a one-off technical exercise which was ultimately sold to a Jaguar racing driver. It is presently believed to be part of the private collection of the current Viscount Cowdray.