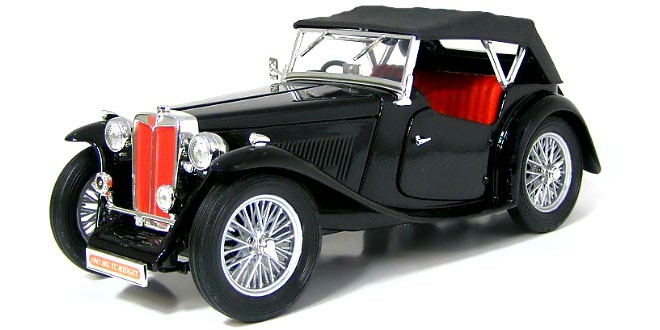 The MG T series of cars (including the TA, TB, TC, TD, and TF) was a basic body-on-frame sports car produced from 1936 through to 1955. It was replaced by the MGA. The TC was the first postwar MG, launched in 1945. It was quite similar to the pre-war TB, sharing the same engine with a slightly higher compression ratio of 7.4:1 giving 54.5 bhp at 5200 rpm but using more modern interior elements allowing a wider cockpit. It was exported to the United States, even though only ever built in right hand drive. The export version had slightly smaller US specification sealed beam head lights and larger twin rear lights, as well as turn signals and chrome-plated front and rear bumpers. Over 10,000 were produced, a large number by MG standards. It cost £527 on the home market in 1947.