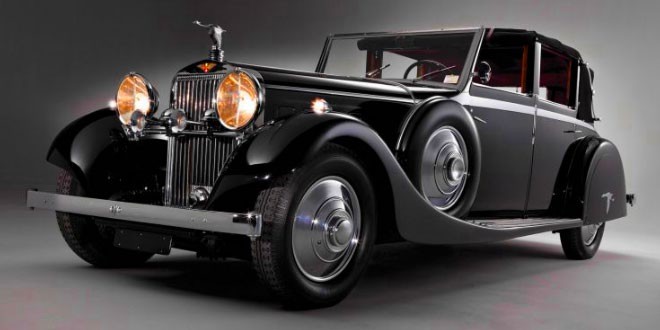 Hispano-Suiza was an originally Spanish and then Spanish-French automotive and engineering firm (actually, from 1923 on, two different companies) best known for their cars, engines (including world famous aviation engines) and weapons designs in the pre-World War II period. Today they are part of the French SAFRAN Group, while the Spanish society in 1946 sold all their automotive assets to Enasa, the maker of Pegaso trucks and sport cars.

In 1898 a Spanish artillery captain, Emilio de la Cuadra, started with electric automobile production in Barcelona under the name of La Cuadra. In Paris, De la Cuadra met the talented Swiss engineer Marc Birkigt (lived 1878 -1953), and hired him to work for the company in Spain. La Cuadra built their first gas powered engines from Birkigt designs. At some point in 1902 the ownership changed hands to J. Castro and became Fábrica Hispano-Suiza de Automóviles (Spanish-Swiss Car Factory), but this company also went bankrupt in December 1903.

Yet another reformation took place in 1904, creating La Hispano-Suiza Fábrica de Automóviles, also under Castro’s direction. Four new engines were introduced in the next year and a half. A 3.8L and a 7.4L four cylinder engine were produced as well as a pair of big six cylinder powerplants. This version of the company managed to avoid bankruptcy, and in Spain remained in operation, as a car, truck and aviation engine producer, with is main plant located in Barcelona, until 1946. They mass-produced cars, trucks and buses, and a number of hand-built racing and luxury cars, some of which ended up being owned by King Alfonso XIII of Spain.However by this point in the early years of the century, France was proving to be a much larger market for their luxury cars than Spain. In 1911 a new factory, known as Hispano France, was set up in the Paris suburb of Levallois-Perret’. In 1914 they moved to larger factories at Bois-Colombes, and took the name Hispano-Suiza.

With the start of World War I the company turned to the creation of aircraft engines under the direction of Marc Birkigt. His solution to building aero engines was unique. Instead of machining separate steel cylinders and then bolting them to a crankcase, he used cast aluminum blocks into which thin steel liners were screwed. This made the engine overall much stiffer, easier to build, and lighter. His design was a V-8 and was the first of what are today known as “cast block” engines, and also sported overhead cams, propeller reduction gearing, and a host of other features that didn’t appear on most other engines until the late 1920s. Another major design effort was the use of a hollow propeller shaft to allow a gun to be fired through the propeller spinner, thereby avoiding the need for a synchronizer gear. This design would be a feature of all future Hispano-Suiza military engines.

After World War I, they returned to automobile engine design, and in 1919 introduced the H6, earning them a reputation similar to that of Rolls-Royce in England. The H6 featured an inline 6 cylinder overhead camshaft engine based on the features of the V8 aluminium WW1 aero engine. Through the 1920s and into the 1930s they built a series of luxury cars of increasing refinement. In fact the 1930s V-12 car engine reverted to pushrod valve actuation to achieve even less engine noise.

In 1923 the French arm of Hispano-Suiza was incorporated as Societé Française Hispano-Suiza, the Spanish parent company subscribing for 71% of the share capital. From then on, the French company gained increased degrees of financial independence, while the technical links were always kept strong.