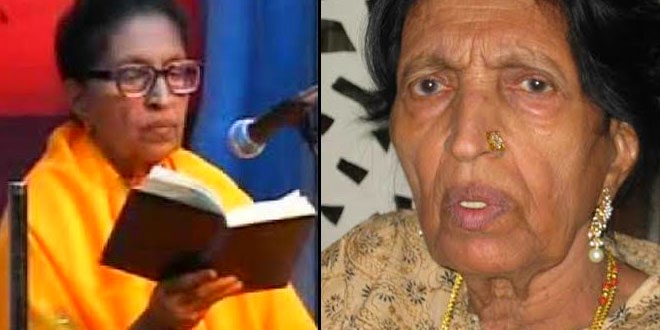 In 1963, when Mubarak Begum Shaikh’s soulful voice urged listeners “Mujhko apne gale laga lo…” few would have been able to resist the urge to hug their beloved.

The famous duet between Mubarak Begum and the late Mohammed Rafi has enthralled music afficionados even five decades after it hit the Indian musical charts.

Years later, in 2008 she gave a public performance at the Green Court Club at Mira Road in neighbouring Thane town and when she started the same number, the entire 2,000-plus audience stood up and gave her a thundering standing ovation for several minutes.

Late On Monday, the mesmerizing voice of “Kabhi tanhaiyon me yun, hamari yaad aayegi” fell silent – forever – leaving behind a trail of sadness among generations of her fans.

Ailing since the demise of her daughter Shafaqbanu last year, Mubarak Begum, a widow, also remained ill, in and out of hospitals, till her death.

Blessed with a rich and powerful voice, she died virtually unsung and in penury. Her funeral was performed in a quiet ceremony at the Oshiwara kabrastan.

She is survived by her son, Hussain, who drives a taxi, daughter-in-law Zarina and granddaughter Sana with whom she had been living for many years.

“She breathed her last around 10 pm last (Monday) night at her Jogeshwari home. She had been ailing and hospitalized frequently since over a year with various health problems,” Zarina Shaikh said.

Born in Sujangarh (Churu) in Rajasthan and proficient both in Hindi and Urdu, Mubarak Begum launched her career with All India Radio (AIR) with ghazals and light musical recitals.

After spending a few years in Gujarat, she migrated to Bombay (now Mumbai) in the late 1940s and got her first playback song break in 1949 for the film “Aaiye” for which the music was composed by the late music director Naushad (rpt Nashad).

That was the launch of a notable singing career spanning over 110 films over four decades till the early 1980s.

Besides Bollywood playback, she sang a few hundred other songs and ghazals in Gujarati, Urdu and Rajasthani — and though always prominent could never attain the required heights.

Unlike many others of her era, Mubarak Begum lapsed into early retirement – by the late 1970s – only coming out of the shadows of poverty to render an occasional Bollywood song.

Nevertheless, she had the privilege of working with some of the topnotch music composers and directors of her era and though statistically few, her songs prominently stood out in the musical cacophony.

During the latter part of her life, she used to give regular stage performance and musical concerts — but more for survival and paying her bills.

Several times, her frustration and rage would seep out before the media and she accused certain singers of stifling her voice and sabotaging her career — echoing what another legend, Shamshad Begum, had voiced on several occasions.

The politics in Bollywood music cost her dearly — her career, her financial progress and even coveted awards or honours — but she took it in her stride.

Mubarak Begum once recounted how her detractors and certain contemporaries blatantly told music composers not to give her singing assignments, or they would be banned by them (the singers).

As a result, though many wanted to use her melodious voice, few — barring the big and established composers — actually took the risk of antagonizing the other leading female singers, and gradually Mubarak Begum was “unheard” of in the music world.

There were occasions in the past few years when her family had to appeal for financial help to take care of the medical expenses of her daughter and then even herself.

Though largely forgotten by the current generation of Bollywood, a few, including Javed Akhtar, Shabana Azmi, Lata Mangeshkar and Bollywood superstar Salman Khan helped her out in times of dire need, while recently Education Minister Vinod Tawde sanctioned her hospitalization expenses.