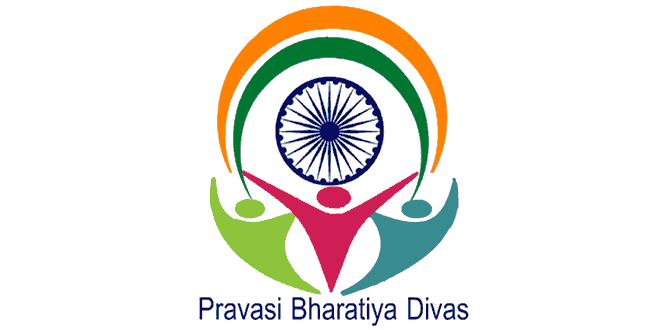 Pravasi Bharatiya Divas: Non-Resident Indian Day is a celebratory day observed (starting in 2015) on 9 January by the Republic of India to mark the contribution of the overseas Indian community towards the development of India. The day commemorates the return of Mahatma Gandhi from South Africa to Mumbai on 9 January 1915.

Established in 2000, it is sponsored by the Ministry of External Affairs of the Government of India and the Federation of Indian Chambers of Commerce and Industry (FICCI), the Confederation of Indian Industries and the Ministry of Development of North Eastern Region. A celebratory event is held on 07 – 09 January every other year in an Indian city: a forum for issues concerning the Indian Diaspora is organised and the Pravasi Bharatiya Samman Awards are given.

Pravasi Bharatiya Divas (PBD) is celebrated once in every two years to strengthen the engagement of the overseas Indian community with the Government of India and reconnect them with their roots. During the Convention, selected overseas Indians are also honored with the prestigious Pravasi Bharatiya Samman Award to recognize their contributions to various fields both in India and abroad.The 15th PBD Convention is being held on 21-23 January 2019 in Varanasi, Uttar Pradesh. The theme of PBD Convention 2019 is “Role of Indian Diaspora in building New India”. Special arrangements are also being made for participation in Kumbh Mela and Republic day parade.

As a run up to PBD 2019, Ministry has organized seven PBD Conferences (Panel Discussions) in New Delhi in 2017 & 2018 on issues importance to the Indian Diaspora. These Conferences are chaired by the Minister of External Affairs. Domain experts from the Diaspora, stakeholders and policy makers based in India and foreign countries are invited for day-long deliberations on various topics. Their recommendations are submitted to the concerned Ministries & Departments in the Government of India for consideration in policy formulation. At the 15th PBD Convention in January 2019, Action taken on the recommendation will be presented to PBD delegates for their suggestions and comments. [SOURCE: http://pbdindia.gov.in/en/about-us]

In 2006, The concept of Overseas Citizen of India (OCI) was launched during the Pravasi Bharatiya Divas convention at Hyderabad on 9th January.

In 2013, 11th Pravasi Bharatiya Divas was held in Kochi from 07 – 09 January, where the Indo-Canada Chamber of Commerce (ICCC) is organising partner of the summit. The President of Mauritius, Rajkeswur Purryag, was the chief guest at the official inaugural session. Canadian Minister Jason Kenney became the first individual of non-Indian heritage to address the gathering.

The 12th Pravasi Bharatiya Divas was held during 07 – 09 January 2014 at Vigyan Bhawan, New Delhi. The Theme for this year was Engaging Diaspora: Connecting Across Generations.

The 13th Pravasi Bharatiya Divas was held during 07 – 09 January 2015 at Mahatma Mandir, Gandhinagar, Gujarat. The Theme for this year was “Apna Bharat, Apna Gaurav“.

The 14th Pravasi Bharatiya Divas, which was supposed to be held during 07 – 09 January 2016 at New Delhi, was cancelled under the MEA’s decision to make the event biennial.

The 14th Pravasi Bharatiya Divas was held during 07 – 09 January 2017 at Bengaluru, Karnataka. The theme for this year was “Redefining engagement with the Indian diaspora”.

The 15th Pravasi Bhartiya Divas 2019 will be held during 21 – 23 January 2019 at Varanasi, India. Prime Minister of Mauritius, Pravind Jugnauth will be the chief guest.

The decision to celebrate Pravasi Bharatiya Divas was taken in accordance with recommendations of the High Level Committee (HLC) on the Indian Diaspora set up by government of India under the chairmanship of L. M. Singhvi. The then Prime Minister of India, Shri Atal Bihari Vajpayee after receiving the report of the Committee at a public function at Vigyan Bhavan in New Delhi on 8 January 2002, announced the “Pravasi Bharatiya Divas”(PBD) on 9 January that year. The day was chosen to mark the return of Mahatma Gandhi from South Africa to India in 1915.

The occasion is marked by special programs to recognise the contributions of NRI / PIO individuals of exceptional merit, felicitate NRI / PIO individuals who have made exceptional contributions in their chosen field / profession (Pravasi Bharatiya Samman) and provide a forum to discuss issues and concerns of people of the diaspora. The event has been organised every year since 2003, and is sponsored by the Ministry of Overseas Indian Affairs and the CII (Confederation of Indian Industry), initially sponsored by FICCI.

The 8th Pravasi Bharatiya Divas took place on 07 – 09 January 2010 and was webcast live at the official Ministry of Overseas Indian Affairs website, also covered live on social media via live blogging and live tweeting at Pravasi Bharatiya, an online platform powered by Kotak Mahindra Bank. An investment facilitation platform for overseas Indians, the Overseas Indians Facilitation Centre, was launched by India’s Prime Minister, Manmohan Singh, with a view of strengthening ties with the diaspora for partnering in India’s growth story on the occasion.

The 2012 Pravasi Bhartiya Divas was held from 07 – 09 January 2012. The venue was Jaipur, Rajasthan. Chief Guest of this event was the Prime Minister of Trinidad and Tobago, Ms Kamla Persad-Bissessar.

The 2013 Pravasi Bhartiya Divas was held from 08 – 09 January 2013 in Kochi, Kerala. Chief Guest of this event was the President of Mauritius, Rajkeshwar Purryag. The 2015 Pravasi Bharatiya Divas was held in Ahmedabad celebrating 100 years of Mahatma’s return to India. Chief guest was Mr Donald Ramtar, President of Republic of Guyana. The theme for this was “Apna Bharat Apna Gaurav” “Connecting Generations”.

Pravasi Bharatiya Divas (PBD), the annual event for the Indian diaspora, was canceled for 2016. The format of the event, which is held between 7 and 9 January, has been changed as announced by the minister of external affairs and overseas Indian affairs Sushma Swaraj, in October 2015. As per the announcement, the event was being moved to different states every two years; a smaller event would be held in Delhi every alternate year.

The Pravasi Bharatiya Samman Award (PBSA) is the highest honour conferred on overseas Indians. PBSA is conferred by the President of India as a part of the Pravasi Bharatiya Divas (PBD) Conventions organized since 2003 on a Non-Resident Indian, Person of Indian Origin or an organization or institution established and run by the Non-Resident Indians or Persons of Indian Origin, who has made significant contribution.[SOURCE: http://pbdindia.gov.in/en/about-us]

The annual Pravasi Bharatiya Divas Program since 2003 has been organised in the following cities: