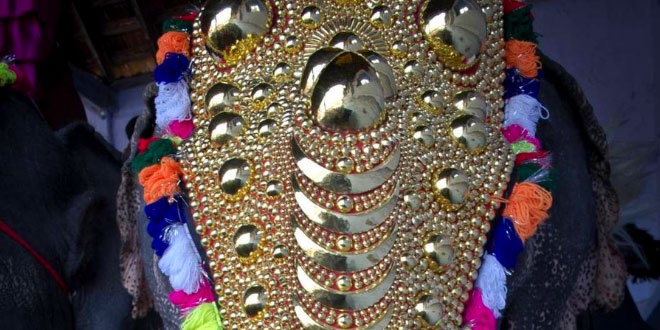 Paripally Gajamela: Every celebration is regarded incomplete without the participation of elephants in Kerala. Elephants are worshiped as an incarnation of the elephant headed god Ganesha.

Elephants tamed in some of the temples in India bear the images of the gods in temple processions on some special days. Elephants hold important place as they have the privilege of escorting the numerous gods and goddesses.

In early days rich and affluent families in Kerala used to house an elephant and were considered a family member. The people of Kerala keenly observe elephant pageants on their special day.

Paripally Gajamela has the popular and unique elephant pageant that is held as a part of annual festival at Kodimootil Sree Bhadrakaali Temple in Paripally, Kerala.

The word ‘Gajamela’ is composed of two words – ‘Gajam’ and ‘Mela’. Gajam is another word for elephant in Malayalam and Mela means fair.

An annual elephant parade in which more than 50 elephants take part is held in Paripally town of Thiruvananthapuram on tenth day of the festival is very popular among masses.

The devotees dedicate the elephants at the temple of goddess Bhadrakali in the hope that it will bring in
prosperity and affluence during the procession. The ritual is called ‘nerch’. The procession presents a spectacular view of a string of caparisoned elephants.

The pooram and vela festivals are the best events to gaze at the majestic tuskers in all their caparisoned brilliance. Mahouts atop Colourfully decked up elephants holding high tinseled silk parasols (muthukuda) and swaying white tufts (venchamaram) and peacock feather fans (aalavattom) to the rhythm of the temple orchestra.

The elephant pageant is accompained by the musical harmony of five traditional instruments (panchvadyam) which forms a passionate element of the kudamattam ritual (the synchronised changing of the parasols atop the tuskers). Cultural programmes are held every night all the way through the festival days.

One of the Kerala’s most impressive temple festivals is Paripally Gajamela. The festival is celebrated every year in February-March.